Deciding to collect Vietnam War militaria is fraught with danger as the marketplace is saturated with fakes and reproductions. I was fortunate that during my first trip to Vietnam in 1997, the late Peter Aitken (who was then at the Australian War Memorial in Canberra) introduced me to a Vietnamese friend of his in Saigon who was able to guide me through the minefield that Vietnam War militaria had already become. I arrived in Saigon with ideas of finding rare Vietnamese Airborne insignia and left convinced that only the brave or foolish would start collecting militaria from the ‘American War’ period… And this was before eBay and the Internet started to take off as a source for collectors!!!

One of the first places that we visited was the Dan Sinh market, also known as the ‘War Surplus’ or ‘American’ market it is the place where much of the supposed Vietnam War militaria originate. Situated at 104 Yersin next door to the Phung Son Tu pagoda, it consists of a rabbit warren of stalls offering everything from electrical parts to footwear. Part of the market consists of small stalls selling military related items. During that first visit most of the stuff was related, in appearance, if not actual age or authenticity, to the 1962 – 75 period but more recently the reproducers have started to include post Vietnam war conflicts and one can find copies of current issue US army multicam, British desert DPM and Australian DPCU camouflage uniforms and equipment amongst the usual ‘junk’. 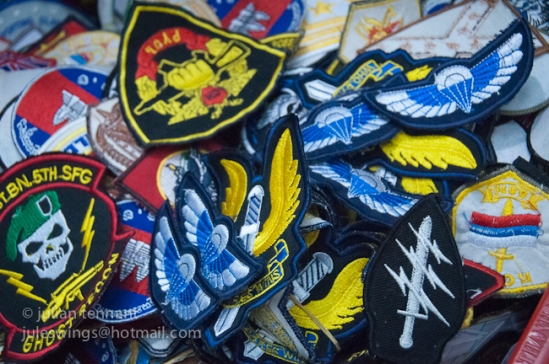 As collectors become more aware of the Vietnam era fakes being produced at the market, the manufacturers have turned to other areas and conflicts, including these poorly copied British SAS insignia. 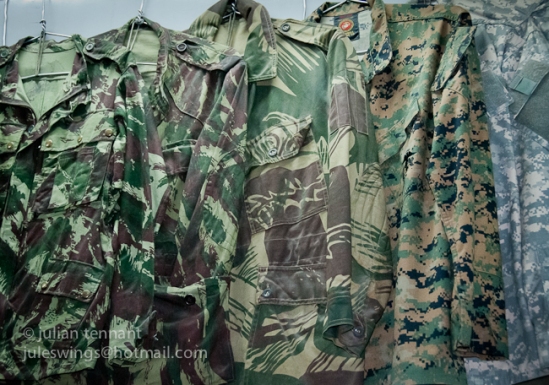 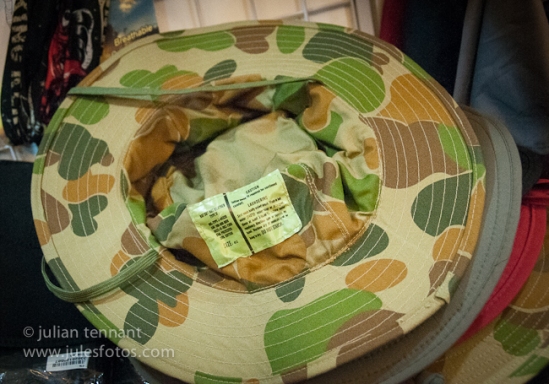 Australian DPCU bush-hat. This camouflage pattern wasn’t introduced until 1988, long after the war ended… and this wide brimmed style sometime in the 90’s.

During that first trip my guide, Loi and I devised a system to identify the fakes and at the same time protect him from recriminations from the sellers. If I found something that I liked I would pick it up, inspect it and then pass it on to him. He would look at it, mutter something like “very nice” then, if it was genuine, hand it back to me and if not, place it back on the table. I quickly became disappointed as everything from MACV SOG patches to ARVN Ranger helmets were placed back on the table. The thing that I didn’t fully grasp at the time was that after the war and the economic difficulties that followed the ‘surplus’ was either recycled or whenever possible, broken down to it’s component parts, brass, aluminium, acrylic etc and sold as scrap. It was only after Vietnam reopened to Western tourism and foreign interest in the war became apparent that the potential of the war legacy became apparent. A lot of the remaining bits and pieces disappeared quickly, but the demand was there and the ever-resourceful Vietnamese started to fill demand by reproducing the items that were in demand. 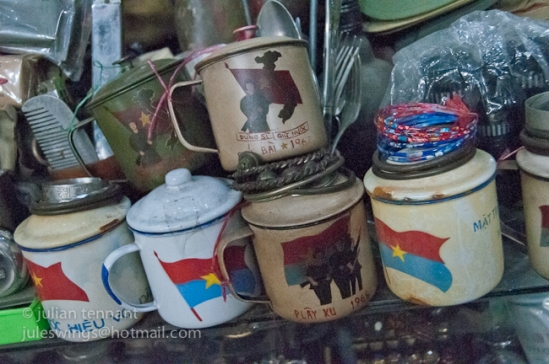 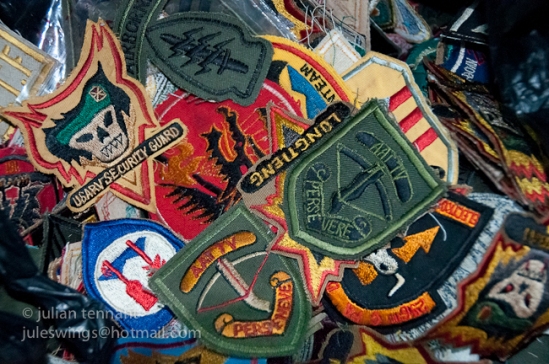 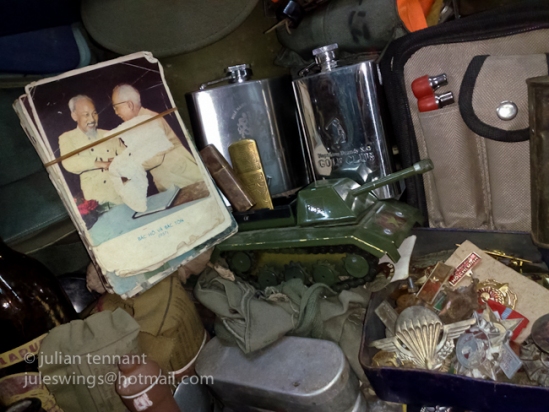 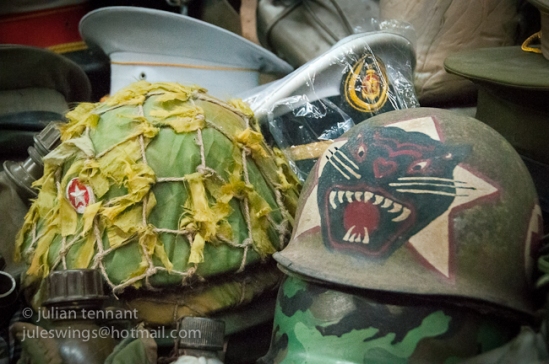 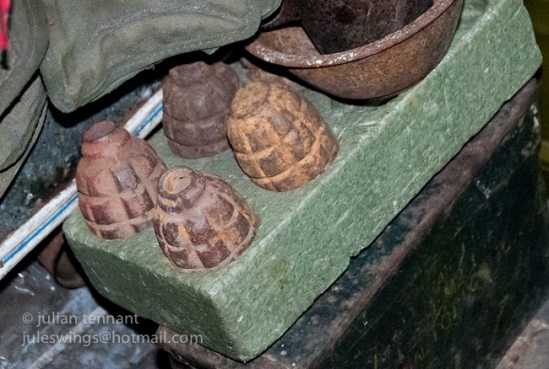 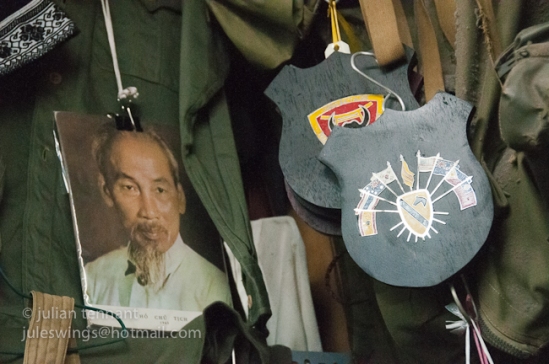 Make no mistake; the guys at Dan Sinh are not fools and know what the state of the marketplace is for their creations… and as collectors become more savvy they shift their focus to take advantage of new opportunities. Over the years I have returned many times and come to know some of the dealers reasonably well. Even back in the 90’s they were already aware of what was in demand and were producing items for unsuspecting collectors. Unscrupulous western dealers had been visiting Vietnam and providing the designs and reference material for their ‘orders’ since the 80’s and the Vietnamese were more than happy to oblige. During that trip in 97 I was shocked to see that one dealer had a copy of the out of print and extremely sought after “Special Forces of the United States Army 1952-2002” by LTC Ian D. W. Sutherland (Ret). Back then, one could expect to pay $200+ for a copy if you could find one and these guys were using it as a standard reference (a ‘gift’ of a US based dealer/customer) for their creations. During a visit around 2007 or 2008, one of the main guys at Dan Sinh showed me an autographed copy of a Schiffer published reference book on insignia from a certain US branch of service. Nothing unusual in that, but what threw me was when he admitted that he was asked by the author, to make the insignia for the book and many of those same rare patches are still being offered for sale (as authentic) by the author via his eBay store. That’s not hearsay; I gleaned that bit of info during a recorded interview with the maker of the fakes. I shudder to think how many people use that book as a reference and placed their trust in the author as a ‘reputable’ dealer. 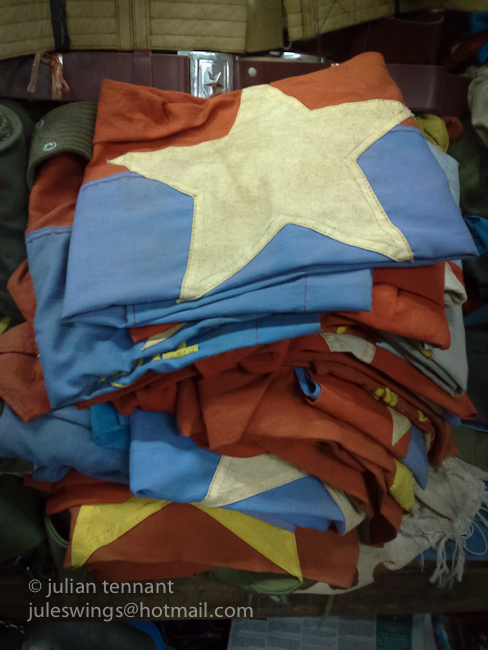 The lesson that I learnt during that first trip was to view all items from the Vietnam War with suspicion. I have a modest collection of Vietnam War period ARVN Airborne, Australian SAS and AATTV items, but tread very carefully. If it doesn’t have provenance, I’ll pass on it. There’s just too much shit out there. I would go as far to say that 99% of the Vietnam War militaria that you can find on eBay are faked, everything from maps and paperwork, through uniforms to aircraft gauges. Supposedly rare MACV SOG patches can be bought for as little as $1 each, wholesale, VC flags, $5 – $10, Zippos (and there will be an entire post devoted to the changes I’ve seen over the years) about $5 retail and less for bulk purchases. Recently I’ve even found reproductions such as those made by George Peterson’s NCHS in the USA being brought IN to the markets and offered by one of the sellers as original. 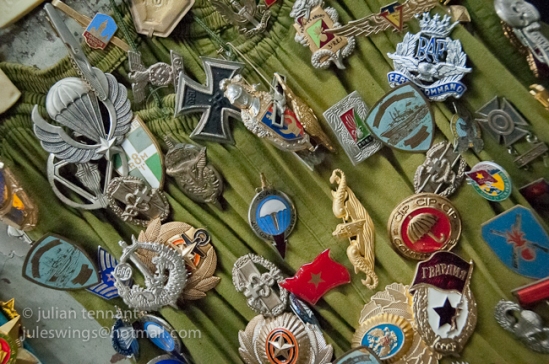 Reproductions (including those made and sold by NCHS in the USA) such as the ARVN Special Forces beret badge near the left corner of the picture are being brought into the Dan Sinh market where they are being resold as ‘original’. Click here for a link to the NHCS listing of the same copy.

As a collector, visiting the Dan Sinh market is a ‘must do’ on any Vietnam itinerary; just don’t fall for the bullshit. Unlike my first visit, these days many, but not all, of the dealers will admit that the items are copies and one or two will even offer to make the items that you require. It’s definitely worth a visit, but if the experience doesn’t make you want to steer well clear of collecting Vietnam War militaria… well then you need counselling. 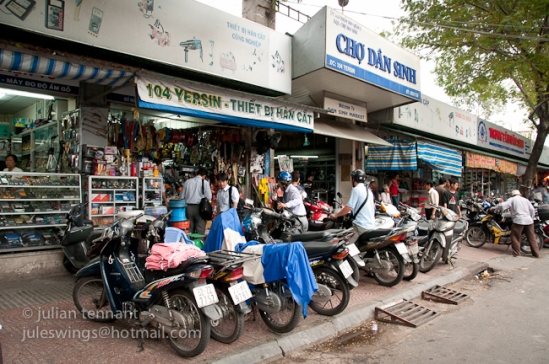 The Dan Sinh Market is open until about 6pm but many of the militaria dealers start closing up around 5. It can be found at 104 Yersin, District 1 and is open every day.