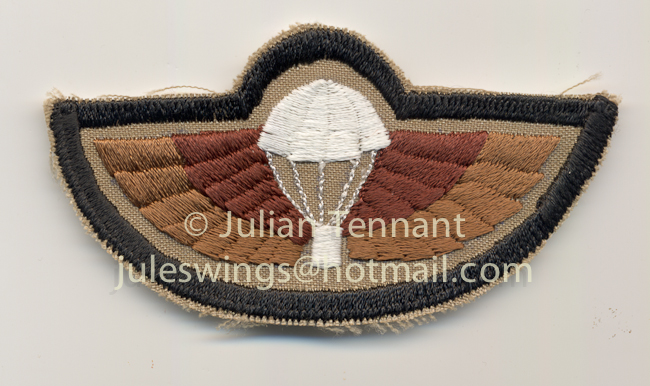 These Australian SAS parachutist wings are amongst the most prized in my collection for a couple of reasons. Apart from their scarcity, they were given to me by Andy Russell who was serving in the SAS at the time and on 16 February 2002 unfortunately became the first Australian to be killed in Afghanistan, when the LRPV vehicle he was travelling in struck a mine. He left behind his wife Kylie and Leisa, his two-week-old daughter whom he had never met. Lest we forget!

Andy gave me the wings in late 1998 not long after he returned from a deployment to Kuwait as part of a US led coalition known as Operation DESERT THUNDER. Contrary to popular myth, this was the first operational deployment by an Australian Special Air Service Regiment unit to the region. No Australian SAS troops had taken part in the first Gulf War although some of the Navy clearance divers of CDT4 who conducted important operations in and around the coast of Kuwait during that conflict had served as sailors in the water operations element of the SAS counter terrorist squadron prior to 1994. In the aftermath of the war, the United Nations sent UN Special Commission inspection teams to Iraq to monitor their weapons program and check for evidence of WMD’s. Two SAS signallers from 152 Signal Squadron, corporal’s Mal V. and Mark S. formed part of one of these teams in 1993 but that was the extent of the Australian SAS involvement with Iraq and the region up until that point.

Then, in late 1997 Iraq began to deny entry to these teams and in response, a coalition led by the USA formed with the initial intention of mounting air strikes to enforce compliance. In February 1998, the Australian Government announced that it had responded to a request from the USA to participate in the coalition. Part of that response included elements of 1 SAS Squadron (A and B troops along with their integrated 1 Sig troop from 152). The squadron was bolstered by the attachment of a troop from the NZ SAS, which formed D troop. This ANZAC SAS force set up camp at a large Kuwaiti air base known as Ali Al Salem.

The squadron’s roll was primarily to undertake combat search and rescue missions (CSAR) into Iraq to rescue downed aircrew and other coalition personnel. A secondary mission was to undertake tactical surveillance and response operations on the Kuwait- Iraq border and a third role was to provide a quick response force (QRF) capability to respond to small scale Iraqi raids. Familiarisation and preparatory training began immediately but two weeks after arriving, the UN struck a deal with Saddam Hussein and the planned air strikes were put on hold. The operation was renamed Operation DESERT SPRING and preparations continued until May when the squadron was reduced to a troop and then returned to Australia in early June.

At the time, Andy Russell was serving in A troop, which was 1 Squadron’s air operations / freefall troop. Whilst deployed to Kuwait, the troop had 20 sets of these ‘desertised’ SAS wings made up by a US army tailor. The wings were never meant to be worn, nor would they ever be permitted to do so. They were sold/distributed within the troop as a memento of the deployment and like many of the sub unit patches so often seen, inject cash into the troop ‘goffa fund’ which was used to buy soft drinks, beer etc for troop functions.

With only twenty examples made, it is definitely one of the rarest Australian SAS badges, but for me, they are even more special having come from a friend who was doing what he loved best, but taken before his time.

4 thoughts on “A special pair of wings”