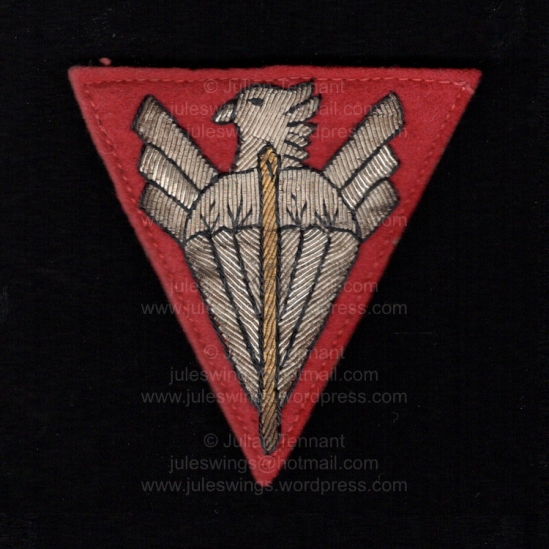 The unidentified French Indochina period French or Vietnamese Airborne unit badge which  formerly belonged to a Nung soldier who fought in both the first and second Indochina Wars. Collection: Julian Tennant

This is an unusual and as yet unidentified early Vietnamese Airborne patch that I have in my collection. It is the actual badge shown on page 81 of Harry Pugh’s book Insignia of the Republic of Vietnam Army Airborne Division, where it is described as an Unknown Airborne Insignia obtained in Saigon in 1967.

When I bought the badge from Harry, he elaborated a little further in an accompanying note regarding its provenance.

“When I was in Vietnam, 67 & 68, the chief of my Nung Security was an older Nung, “Song”. He had served with the French during the French Indochina war but I never asked him which unit. After the war he served with the Nung units of the U.S. Special Forces. At some point he was wounded again and retired. Was told, but no confirmation at all, that he was in the camp when Donlon got his Medal of Honor [In 1964 US Special Forces Captain Roger Donlon won the first Medal of Honor to be awarded in Vietnam]. A predecessor had hired him as the security chief at Tam Ky, Quang Tin Province, Embassy House.

Song and I were good friends as we shared an interest in planting flowers on our bunkers etc. Anyway, when he learned that I collected insignia (at the time was just starting out) he came back from a leave to Saigon and brought this patch to me. He said it was the insignia that he wore when serving with the French. – I do not know if in a Vietnamese or French unit. That is the only identification I got and never followed through.

Later, I have seen a photo of troops with this patch being worn. But I just do not know the rest of the identity.”

The badge measures 65mm wide by 65mm high and its construction methods match the insignia made during the French era and the early post-colonial period, including the use of the French style attachment pin. 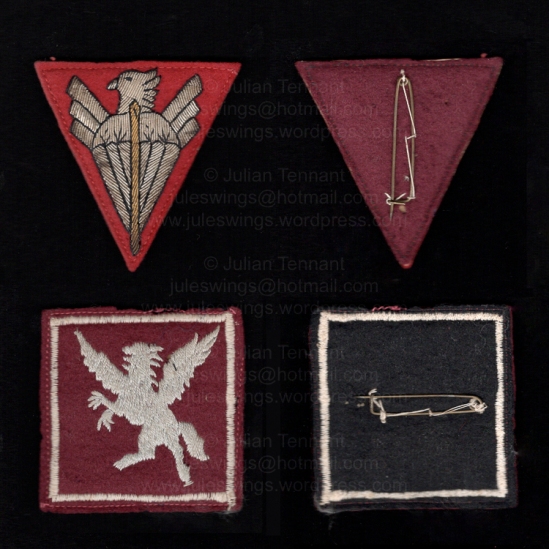 A comparison showing the front and rear of the unidentified badge and one of the 1955-1959 period Vietnamese Airborne Group patches in my collection. The construction methods of both badges including attachment pins are very similar. Collection: Julian Tennant

During my research, other collectors have suggested that the design is somewhat reminiscent of the French Airborne School, Ecole des Troupes Aéroportées (ETAP) and Base-Ecole des Troupes Aéroportées (BETAP) badges (as shown below). However, I think that the connection between the French based parachute school and this insignia is incidental as the airborne training units serving in French Indochina had their own unique insignia.

1953 period Base-Ecole des Troupes Aéroportées (BETAP) breast badge. Some design similarity can be seen between this insignia and the unidentified bullion badge, however I think that it is purely coincidental as neither the ETAP nor BETAP served in Indochina and the differences are significant enough to discount a connection. Collection: Julian Tennant

I have not yet been able to track down the photograph that Harry refers to in his note, nor can I find any reference to this design in either the Malcros or Baltzer/Micheletti French Airborne insignia books and none of my French-language reference books about Vietnamese and ARVN badges feature similar insignia, so it remains a mystery to me. If anybody can help with the identification of this badge, your assistance will be greatly appreciated.