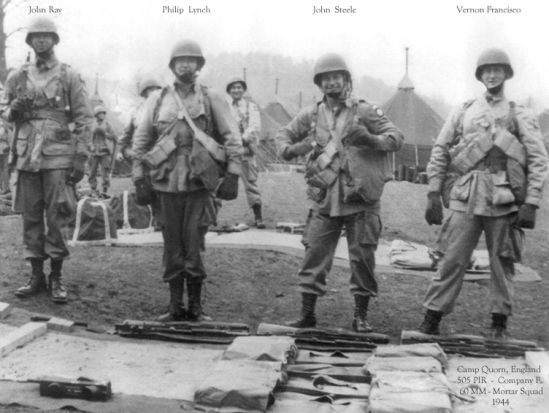 Private John Marvin Steele, second from right, who along with John Ray, Philip Lynch and Vernon Francisco comprised F Company, 505 PIR’s 60mm mortar squad, just before D-Day at camp Quorn, Leicestershire, England. John was the only one of the four to survive the war.

In the early hours of 6 June 1944, Private John Marvin Steele, an American paratrooper from F Company, 2nd Battalion, 505th Parachute Infantry Regiment of the 82nd Airborne Division jumps over Sainte-Mère-Église village on the Cotentin Peninsula, Normandy as part of Mission BOSTON. His unit’s objective is to capture the village, a crucial communications crossroad behind UTAH Beach and block German approaches from the west and southwest.

Unfortunately for Steele, a house in the village is on fire after being hit by a stray bomb and the usually quiet town square is filled with German troops who are trying to extinguish the blaze. The flames illuminate the square and many of the paratroopers are killed as they descend. John Steele is hit in the foot and his canopy catches on the village church’s bell tower. He tries to free himself but drops his knife and is left dangling helplessly for a couple of hours. Eventually, two German soldiers climb up to cut him down and take him to an aid station. Three days later Steele escapes and crosses back into Allied lines. He goes on to jump in Holland, participating in the liberation of Nijmegen and later the Battle of the Bulge. John Steele survived the war and returned to Sainte-Mère-Église several times to commemorate the landings before finally succumbing to throat cancer in 1969. His D-Day experience, hanging from the chapel bell tower has been immortalised in the movie “The Longest Day”. 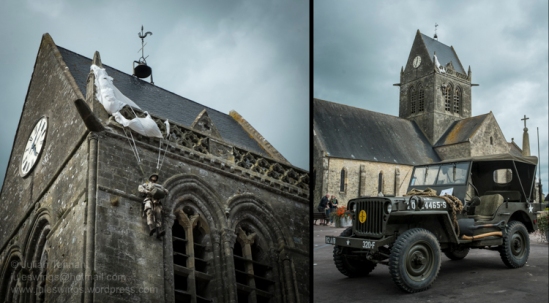 Sainte-Mère-Église church continues to feature a dangling US para in remembrance of the events of the early morning of 6 June 1944. Photos: Julian Tennant

Sainte-Mère-Église was captured by the 3rd Battalion of the 505th at 04:30, not too long after Steele was taken to the aid station and the village became the first town in France to be liberated by the Allies on D-Day. The German counter-attacks involving infantry and armour began at 09:30 and after eight hours of fighting only sixteen of the forty-two paratroopers holding village were still alive. But the American paras held their ground and on 7 June tanks from UTAH Beach finally arrived. The beachhead was secure and the link-up between air and ground forces had been achieved.

There are several points of interest commemorating the battle in the town along with a few militaria dealers. Many of the local shopkeepers also recognise the historical importance of the event and some include small displays of their own, so it is worth setting some time aside just to relax and explore. I would recommend buying a copy of Major & Mrs Holt’s D-Day Normandy Landing Beaches battlefield guide and using their walking tour as a way of exploring the area.

Waiting for a haircut in Sainte-Mère-Église. Photo: Julian Tennant 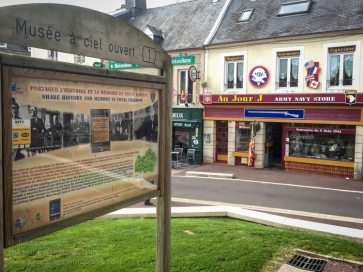 However, the start point of any visit to Sainte-Mère-Église should be the Airborne Museum, which is located metres away from the church and is actually on the site of the house fire of that fateful night of 5-6 June 1944.

Opened in 1964, the original museum building was designed by architect François Carpentier to reflect the shape of an open parachute canopy. Since its inauguration the museum has had several additions and currently consists of three exhibition buildings. The original museum building is referred to as the WACO building. Its centerpiece is an original Waco CG-4A glider surrounded by various uniform, weapons and equipment displays.

Patches of the American units involved in the D-Day Landings on the 6th of June 1944. Photo: Julian Tennant

German Wehrmacht POA volunteer uniform display. By the spring of 1944, one in six infantry battalions along the Atlantic Coast was composed of Osttrupen and foreign volunteers. On the east coast of the Cotentin Peninsula, the 709th Infantry Division was a typical example with one in five in its ranks being a volunteer from the east. Photo: Julian Tennant 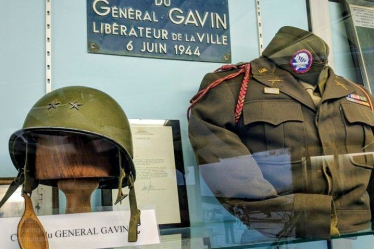 Helmet and uniform of General James Maurice “Jumpin’ Jim” Gavin, who was the assistant division commander of the 82nd Airborne Division on D-Day. He later went on to command the division. Photo: Julian Tennant

Ralph Busson, Bill Farmer and Don Furlong, three squad leaders with H Company 508 PIR divided this dollar bill in Nottingham England on 5 June 1944. The pieced it back together at the unit reunion in 1983. Unfortunately, Bill Farmer was killed during the fighting in Normandy. Photo: Julian Tennant 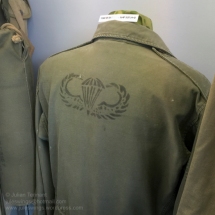 M42 jump jacket and side cap belonging to Captain Robert “Bob” Piper of the 505th Parachute Infantry Regiment. Bob Piper took part in all the actions of the 82nd Airborne Division in WW2 and made five combat jumps. Photo: Julian Tennant

The second gallery is referred to as the C-47 building and features the Douglas C-47 Skytrain ‘Argonia,’ which was flown by Lt. Col. Charles H. Young, CO, of the 439th Troop Carrier Group during Operation NEPTUNE. The aircraft was also used for the drop during Operation MARKET GARDEN, but in this display, it is used as the focal point for a scene that is loosely based on General Eisenhower’s visit to the paratroopers of the 101st Airborne Division just before they departed for the Normandy.

US Army Air Force crew in front of the Douglas C-47 Skytrain “Argonia” of 92 Squadron of the 439th Transportation Group. Photo: Julian Tennant 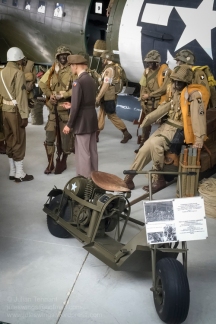 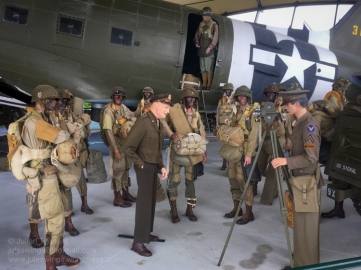 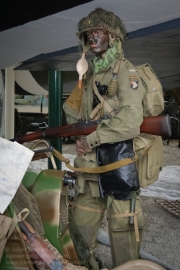 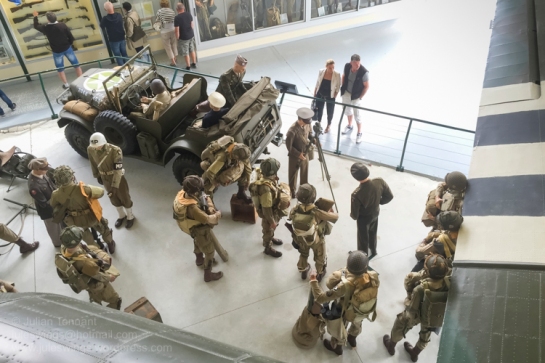 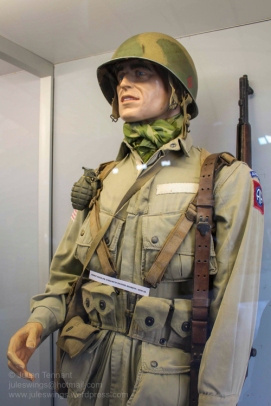 The newest exhibition building, named Operation NEPTUNE was opened to the public for the 70th anniversary of the D-Day landings and uses several life-sized diorama displays combined with sound and lighting effects to give the visitor an impression of the paratrooper’s D-Day experience. 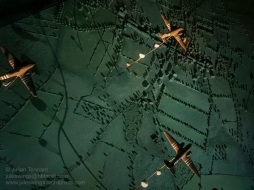 Model of the jump over over Normandy which can be seen through the fuselage floor of the paratrooper filled C-47. Photo: Julian Tennant

Paratroopers aboard a C-47 heading towards the DZ. Photo: Julian Tennant

Detail of the paratroopers aboard a C-47 heading towards their Normandy DZ. Photo: Julian Tennant

Panorama view of the displays in the “Operation NEPTUNE” building 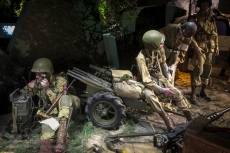 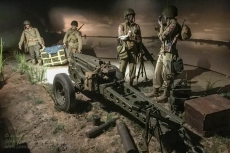 German para from Fallschirmjäger Regiment 6 who fought against their American counterparts during the early days of the Normandy invasion. Photo: Julian Tennant

In May 2018 the museum introduced the HistoPad, an augmented reality tablet device that allows visitors to manipulate a series of 3D virtual relics and artifacts, see inside of aircraft, virtually operate and manipulate full 360-degree views of equipment, compare scenes today to how they appeared in 1944, view unpublished photographs and extracts of archival films. It is provided free to all visitors over six years old who are not part of a group tour. You can view one of the museum’s HistoPad promotional videos below or visit the creator’s website to see more pictures and details of the Airborne Museum’s HistoPad experience.

Using the HistoPad in the Waco Building. Photo courtesy the Airborne Museum.

In addition to the exhibition spaces, the Airborne Museum also has conference rooms for hire and gift shop. The shop, is definitely no match for Paratrooper shop at the D-Day Experience and Dead Man’s Corner Museum in Saint-Côme-du-Mont, but it does offer some interesting books and DVD’s along with the usual reproduction souvenirs aimed at the (non-collector) tourist.

At the time of writing (June 2020) the Airborne Museum has just reopened to the public, so visiting is possible, however there are new visitor requirements to take into account the COVID-19 pandemic. The current restrictions are outlined here.

If you like what you see here, please FOLLOW this page via email or by using either the buttons below or in the column on the right.  I try to post NEW content every Sunday and knowing that somebody is looking at this gives me the encouragement I need to set aside time to go through my archives and collection in order to develop the content for the page. And of course, feel free to contact me here, via email or by visiting my Facebook or Instagram pages

One response to “The Airborne Museum – Sainte-Mère-Église, Normandy, France”