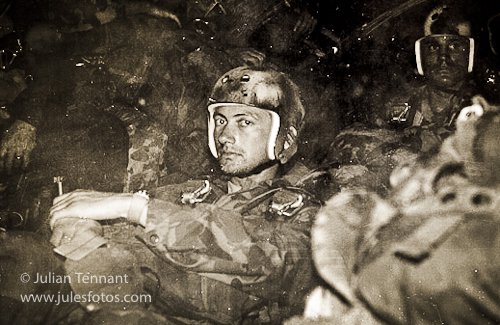 I have been collecting militaria for over 40 years, specialising in Airborne, Special Forces and unconventional warfare units. Along with military historian, Cliff Lord, I am co-author of ANZAC ELITE: The Airborne & Special Forces Insignia of Australian & New Zealand, published by IPL Transpress. A former soldier, I now work as a freelance photographer, writer and media content provider as well as lecturing in the Photo-media department of North Metropolitan TAFE in Perth, Western Australia.

My collecting interests are predominantly in the following areas

If you have items from any of these areas, that you would like to sell or trade, please contact me.

With forty years of collecting under my belt, as well as well over a decade of service in the regular army and reserves, I have accumulated a lot of military bits and pieces, which I will occasionally list here or on eBay, where I trade under the name of jules118. If you have specific interests and a defined ‘wants’ list, please feel free to contact me. I can also be found on Facebook.

Unless otherwise stated, the content and opinions on this page are my own. I retain the copyright on all my photographs and text, if you would like to use any of the content you see here, please ensure that you contact me prior to reproducing or publishing so that an appropriate usage license can be negotiated.

2 responses to “About Julian Tennant”