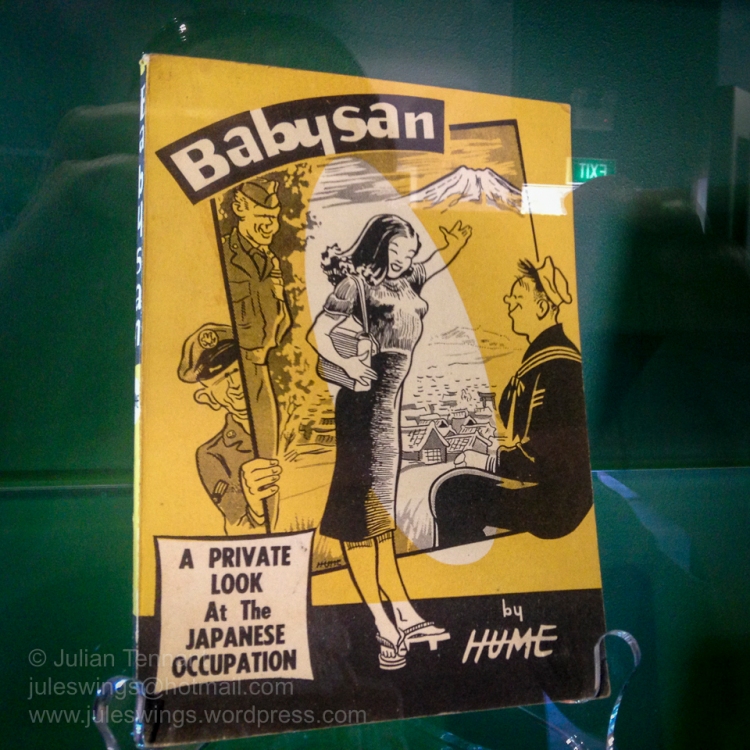 Babysan was a comic created by American artist Bill Hume while he was stationed in Japan in the 1950s. The comic depicts American sailors interacting with a pin-up style Japanese woman named Babysan. The title comes from the word “baby” an affectionate term Americans use and “san” which is an honorary term used by the Japanese. It translates literally to Miss Baby. The comic became incredibly popular with United States service members in Japan by mixing good humor with culture, language, and sex. Photo: Julian Tennant

Singapore Armed Forces 1st Commando Battalion.
Singapore’s Beach Road Army Market – November 2022.
Singapore Army Special Operations Force SOF insignia. The Special Operations Force is an Army subunit of the SAF’s 1st Commando Battalion and along with the Singaporean Navy’s Special Warfare Group of the Naval Diving Unit make up the Special Operations Task Force (SOTF). Their role is to provide a counter-terrorist capability to the Singapore Government that can respond to air, land and sea threats at home or abroad.
Singaporean made patch for the Indonesian TNI Komando Pasukan Khusus (Special Forces Command) top-tier counter terrorist unit, KOPASSUS Detatchment 81 which is also known as SAT-81 Gultor. The unit, which is organized into a group HQ and two Special Forces Battalions, recruits members who have at least 2 years of active service in one of the KOPASSUS units and must pass a 6 month Counter Terrorism Selection and Reinforcement Training cycle before being accepted for service with the unit.
One of the patches that I found in Singapore and managed to pry from a reluctant tailor who had it on his display board. I was interested in it because of the Australian connection. Exercise Bersama Shield 18 was conducted from 27 April to 15 May 2018.
Dropped in to the ‘A’ Team Store ( @ateammilitarystore ) and had a nice chat with proprietor, Tom Kalwani last week. His shop has been in operation since 1985 and he has some good connections with the Singapore Armed Forces Commando formation. So if you’re a collector visiting Singapore, I highly recommend visiting his shop in the Peninsular Shopping Centre to say hello.
Here are a couple of interesting local Singaporean made “foreign” parachutist jump wings that I found during my most recent trip.
I’ve been in Singapore for the past week. It has been good to revisit some old collecting haunts that I have not been to for a few years.
Another hard day at the office for one of the vendors at Singapore’s Golden Mile ‘Army Market’ on Beach Road
Singapore. I dropped into the Golden Mile ‘Army Market’ yesterday and noticed that one of the tailors was in the process of making these new Frogman School patches. I assume that they will be for the diving instructors and staff who train the Singapore Armed Forces divers.
1964-65 Congo FATAC /UDA "air commando" insignia.
I was going through one of my trade/swap boxes the other day and discovered these French Foreign Legion Association patches for various regional branches of the association. Not something that I usually collect so they must have been part of a collection that I acquired sometime in the past, but now I am curious to know about the other types that exist.