The invention of photography in 1839 changed the world. It provided a more accessible means for society to record and over the course of time, define itself. For the collector, researcher and historian, photographic records are absolutely invaluable in providing important pieces of information about everything that has contributed to our past and our current identity. The camera has recorded everything, from the minutiae of detail on an item of clothing to a providing a document of events that shaped opinions and changed the course of history.

Like many soldiers, I also carried a camera and documented my life in the army and when I decided that it was time to head down ‘civvie’ street, I opted to take my photography to the next level opting to become a professional photographer. These days, in addition to taking photographs I also work as a Photography/Media lecturer at the Central Institute of Technology in Perth. My classes are varied and range from teaching digital capture, editorial photography to traditional darkroom and long obsolete 19th century ‘alternative’ printing techniques. I have also been responsible for instructing the students on storing archiving and exhibiting their photographic collections. These are aspects that most people pay little attention to, with potentially disastrous consequences for the future, particularly in this digital era of built in obsolescence where technology becomes obsolete overnight and we are no longer limited by the shooting restrictions of a roll film. 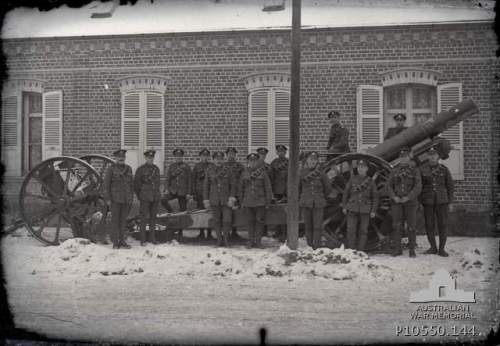 So, in future blog posts, I’ll present a series of articles aimed at us collectors and military enthusiasts that will look at how to preserve, store and share the photos that are important to us, from a collectors perspective and also to ensure that our kids or grandchildren can enjoy the photographs that we take today. We will look at the various technologies from the birth of photography in 1839 through to the present day. For each of these we will cover considerations for preventive conservation, storage, handling and presentation. There’s a lot of ground to cover and I’ll break up the sessions with some battlefield reports (I’m heading back to Vietnam in a few weeks) or titbits from my collection.  But, before we start, here is something that should arouse your interest in the topic. 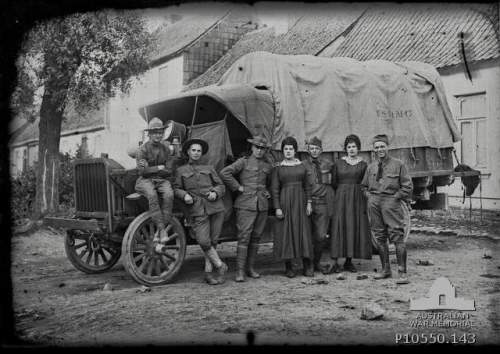 Vignacourt is a small French town a little to the north of Amiens and during the First World War played an important role as a base and rest area for allied troops from the nearby fighting as it was just outside artillery range, but close enough to act as a staging area for the British sector. In late 1916 hundreds of Australians moved from the winter trenches of the Somme to the relative comfort of the town to rest and refit. Whilst many of the young Frenchmen had left to fight, the town it was still functioning and amongst those who remained were Louis and Antoinette Thuillier who turned their home into a photo studio and advertised for soldiers to have their photographs taken.

These were taken using glass plate negatives and printed outdoors, using the sun to expose the image onto postcards which the diggers could keep as a souvenir or send home to their families as evidence that they were still alive and well. Thousands of soldiers passed through their studio and whilst many of the resulting images have been preserved in family albums and institutions, it was believed that the original glass negatives had been lost. Then, in 2011 over 3000 of the glass negatives were discovered in a barn, amongst them around 800 images of the Australian troops. Kerry Stokes, businessman, philanthropist and friend of the Australian War Memorial generously donated these to the Australian War Memorial. Of these, 74 images were selected and reprinted using the traditional darkroom techniques and featured as part of the Remember me: the lost diggers of Vignacourt exhibition which ran at the AWM until July 2013.

The exhibition combines the images along with it’s own records and collection to tell the story of the subjects in their own voices. Whilst the exhibition only features a small number of the photos, the full collection is available online at the AWM site (http://www.awm.gov.au/exhibitions/remember-me/collection/). To coincide with the exhibition, Ross Coulthart has produced a book, The Lost Diggers, which tells the story of the discovery of the negatives and the stories of many of the people in the photos. The AWM has also released a video showing the restoration and printing of the images, which is worth watching and provides an insight into the preservation of this type of photograph.

Click the image to see a video featuring some of the background preservation and production of the images.

Zimbabwe. Some of the 1 Zimbabwe Commando Battalion pieces plus Zimbabwe PJI brevet held in my collection.
Transkei. Coming up on www.juleswings.wordpress.com I’ll be taking a look at the airborne and special forces insignia used by the Transkei Defence Force from 1981-94.
Vasbyt! The Parabats are coming. Some border war period SADF 1 Parachute Battalion pieces. Collection: Julian Tennant
SADF Hunter Group. Some South African Hunter Group pieces in my collection. The Hunter Group was an unofficial counter-insurgency unit that grew out of the South African Irish Regiment. It was formed in 1968 and disbanded in 1976. Training was part-time and included bushcraft and survival skills, demolitions, advanced weapons handling, guerrilla warfare, tracking, parachuting and other skills, with the distinctive scorpion badge indicating that the wearer had completed a set number of hours training. Collection: Julian Tennant
Some of the earlier South African airborne pieces in my collection. Mess dress metal and cloth first pattern South African Parachute Jump Instructor brevets issued from 1962 to 1963 (top). Parachute Training Centre and 1 Parachute Battalion shoulder patches circa mid to late 1960’s (bottom). Collection: Julian Tennant
Some pieces from The SADF / SANDF’s 7 Medical Battalion Group, which is the specialist Airborne Medical Unit of the South African Military Health Service. Alongside the parachutist wings and shoulder flash are the specialist proficiency badges for the Medical Officer and Ops Medic. For 7 Med Bn medics both of these qualifications feature a dagger, symbolising their connection to special forces, rather than a staff which is used on the standard versions of these insignia. Collection: Julian Tennant
Os Terriveis (The Terrible Ones). 32 Battalion SADF 1975 - 1993. Collection: Julian Tennant
Recce! A handful of pieces from my SADF Reconnaissance Commando collection including a numbered and issued operators badge, attack divers badge, free fall qualified parachute wings, beret badge and 1 Reconnaissance Regiment shoulder flash. Collection: Julian Tennant
Rhodesia. Some of the Selous Scouts related pieces in my collection. The wing (04XX) is one of a couple of issued examples I own. The Rhodesian General Service Medal was also issued to a (different) member of the Selous Scouts. Collection: Julian Tennant
FAKES!!!! These are just some of the faked Australian Army Training Team Vietnam (AATTV) patches that are being sold by unscrupulous crooked dealers on eBay and elsewhere. I bought almost all of these during my numerous trips to Vietnam since the 1990's. They are sold there as COPIES (the dealers in Vietnam stopped pretending they were original about 20 years ago) and can be bought for as little as US$1 each. Collectors should remember that the majority of AATTV patches issued during the war were the Japanese made patches. It was only in the final years of the AATTV's existence that a local made patch was sourced and that all confirmed originals indicate that they were sourced from a single manufacturer whose embroidery style is significantly different from all these fakes. Caveat Emptor.
After over 40 years of collecting I try to save space (and money) by focusing only on insignia. But things don’t always go to plan and somehow I acquired this two tour SASR Vietnam veterans group that includes uniforms and some paperwork. The picture shows wing detail from his battledress, service dress, blues and starched jungle greens barrack dress uniforms. Collection: Julian Tennant
Qualification and naval branch (TLDM) insignia worn by members of the Royal Malaysian Naval Special Operations equivalent of the USN SEAL Teams, Pasukan Khas Laut, or more commonly known as PASKAL. This is part of a display at the Royal Malaysian Navy Museum (Muzium Tentera Laut Diraja Malaysia) in Melaka. You can see more pictures from the museum on my site at https://bit.ly/3fxjxWL
Loading Comments...
%d bloggers like this: