Featured this week is a very nice medal group to a WWII Hungarian paratrooper that I hold in my collection.

The group belonged to Sergeant Császár Vilmos. I still know very little about him but have learned that he served in the 3rd Parachute Company in 1941 as Lance-Corporal, was later promoted to sergeant and survived the war. His medals give clues to his service, but I am still in the process of researching his story so cannot provide a more comprehensive overview of his service at this stage.

His medals include:
The Silver Medal of Courage (Magyar Nagy Ezűst Vitézségi Érem).
The Fire Cross with Wreath and Swords (Tűzkereszt koszorúval, kardokkal) which was awarded for 3 months service in the front line as a combatant.
The Six years Long Service Cross (Legénységi Szolgálati Jel III. Osztálya)
The Upper Hungary campaign medal (Felvidéki Emlékérem)
The Medal for the Liberation of Siebenbürgen (Transylvania) (Erdélyi Emlékérem) and
The Medal for the Recapture of South Hungary (Délvidéki Emlékérem)

Hopefully the Hungarian names for the medals is correct, I have found several different translated names for these medals and so am not 100% certain if my titles are right.

Also included in this group are his railway pass, bullion NCO’s parachutist wings, his extremely rare ‘Master’ parachutist badge which was awarded for 25 (perfect) jumps, plus several photographs of him in uniform and conducting parachute jumps. 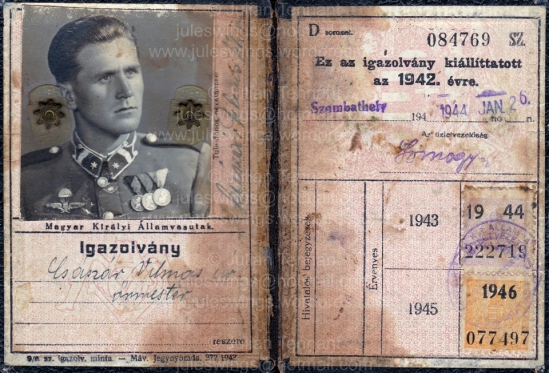 Sergeant Császár Vilmos’ Railway booklet dated 26 Jan 1944. When the photograph for the pass was taken it appears that Sgt Császár Vilmos had only been awarded the Upper Hungary campaign medal (Felvidéki Emlékérem), the Medal for the Liberation of Siebenbürgen (Transylvania) (Erdélyi Emlékérem) and the Medal for the Recapture of South Hungary (Délvidéki Emlékérem). He was subsequently awarded the ‘Fire Cross’ with wreath and swords reflecting at least 3 months in the front line as a combatant, the Silver Medal of Courage for bravery and  Six Year Long Service Cross. Collection: Julian Tennant 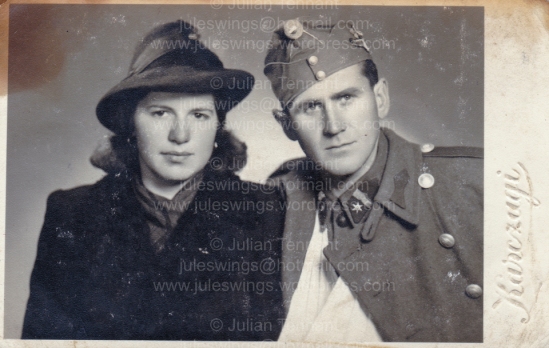 Studio portrait of (Sergeant) Császár Vilmos and female, possibly wife or sister? The photograph shows that his arm is in a sling, indicating a wound or injury so I am guessing that this photo was taken whilst on recovery leave. Note that Császár Vilmos is also wearing the bullion NCO’s jump wing on the left side of his cap. Collection: Julian Tennant 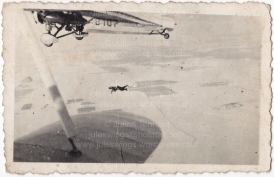 One of Hungarian paratrooper Császár Vilmos’ photos showing a para exiting a Caproni ca.101 aircraft. These three-engined, already outdated Italian bombers were able to carry up to seven paratroopers and were nicknamed ‘Flying Coffins’ by the paras. Collection: Julian Tennant

Császár Vilmos on the DZ after a jump. Collection: Julian Tennant

I have not yet been able to discover much about Császár Vilmos. The presence of the Liberation of Siebenbürgen (Transylvania) (Erdélyi Emlékérem) medal, which was introduced on the 1st of October 1940 to commemorate the incorporation of Northern Transylvania into Hungary indicates that Császár Vilmos became a paratrooper early in the war and possibly a member of the Royal Hungarian 1st Honvéd Parachute Company, before it was expanded to a Battalion in 1941.

When the 1st Honvéd Parachute Battalion was formed, Császár Vilmos was posted to the 3rd Company. My knowledge of the operations undertaken by the Hungarian paratroopers is weak, so I am not sure about exactly where he fought although the inclusion of the Upper Hungary and Southern Hungary medals in the group provides clues for my continuing research. At this stage of my research I am still largely ignorant of the qualification requirements for these medals and what role Hungarian paratroopers may have carried out in those operations. Hungarian researcher and historian, David Kiss, has written a very informative English-language article about the early history of Hungarian paratroopers which details some of the operations they were involved in, but I am still trying to ‘connect the dots’ between the historical records and the service of this soldier. However as new information comes to light I’ll continue to update this post to reflect a more complete record of  Császár Vilmos military career.