Original 1952 issue 1er Battaillon de Parachutistes Laotiens (1BPL) badge. The parachute and wings represent the airborne status of the unit. The four tiered parasol surrounded by three elephants symbolises Laotian royalty and reflects the legend that Khoun Borom founded the Kingdom after arriving on a white elephant and protected from the sun by a 4 tiered white parasol. The three elephants also symbolise the three principalities of Laos until 1947. The red enamel work reflects the national colour. The motto can be translated as “Dare to Conquer” or “As Courage Triumphs”. 2000 of these badges were ordered from the Drago company in 1952 and features the “Drago Paris Nice 43. R.  Olivier Metra” hallmark. Collection: Julian Tennant

The first Lao parachute unit, 1ere Compagnie de Commandos Parachutistes Laotiens (1ere CCPL)  was raised by the French in July 1948 from soldiers of the 3rd Company of the 1st Laotian Chasseur Battalion (1ere BCL). On 11 May 1949 it conducted its first operational parachute jump when 18 commandos were deployed to reinforce the garrison of Luang Nam Tha. By the end of the year it had carried out six more airborne operations and by April 1951 the unit had expanded from three to six commando sections. Then, in October 1951, Commandos 4, 5 and 6 were removed to form the basis of the 2nd company for a new unit, the 1st Laotian Parachute Battalion (1er Battaillon de Parachutistes Laotiens 1 BPL) 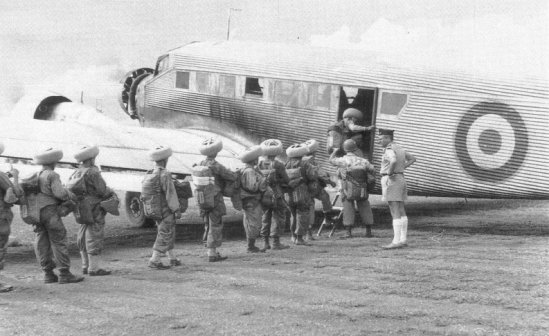 On 1 April 1952, 1BPL was formally established with a strength of 853 men, including 13 French officers and 46 NCO’s, divided into a headquarters and three companies. By the end of the year the battalion had participated in 20 operations of which 6 included parachute insertions. In December 1952, during Operation Noel, 576 men from the unit parachuted into Sam Neua (Xam Neua) in north-eastern Laos to reinforce the garrison there. Then, in February 1953, a fourth company of 80 more paratroopers jumped in to bolster the garrison strength. However, in April 1953, the Viet Minh launched an invasion of north-eastern Laos crushing the garrison and forcing the remnants of the battalion to flee toward the Plain of Jars.

Paratroopers of 1 BPL prior to a training jump. The French officer at the front left is Captain Lucas who served in the Battalion from April 1952 until 22 April 1953 when he was captured by the Viet Minh. He had led the battalion during the airborne reinforcement of Sam Neau (Operation Noel) but was captured in the vicinity of Ban Hua Muong, during the retreat after Viet Minh forces overran the garrison. He was reported as having died in captivity on 1 December 1953.

1 BPL radio operators during Operation Dampièrre in the Luang Prabang area, August to October 1953. Due to the low levels of literacy, which was reflective of the Lao population overall, which combined with different language dialects made it difficult to train specialists such as signalers and medics. 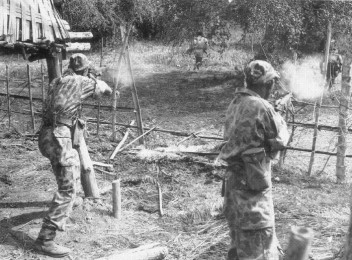 Lao parachutists of 1 BPL undertaking a public relations demonstration. Note the British 37 pattern ammunition pouches on their belts. Equipment issues for the troops of the Armée Nationale Laotiènne (ANL) including the parachute battalion was a mixture of French and British items.

In May the unit was reformed at its base in Chinaïmo army camp on the eastern outskirts of Vientiane, undertaking commando and reconnaissance tasks north of Luang Prabang. In March 1954, 1er BPL began preparations for the relief of Dien Bien Phu as part of Operation Condor and by early May the battalion had relocated close to the Lao-Vietnamese border but withdrew after the French garrison surrendered.  On 18 June 1954 the unit regrouped at the French Air Force base at Seno near Savannakhet, then conducted the last airborne operation of the war when it parachuted into the town of Phanop in Khammouane Province to link up with militia units to clear the territory up to the Mu Gia Pass on the Vietnamese border.

An unknown French officer serving with 1BPL. Note the enameled unit badge on his right breast pocket and the standard French parachutist beret badge. During the period of 1BPL, the standard French wings were also worn. The distinctive Lao style beret badge which replaced the sword with a trident and also the Lao parachute wings, were created after the French departure and 1 BPL had been re-designated 1st Parachute Battalion of the  Armée Nationale Laotiènne. Collection: Julian Tennant.

Paratroopers of 1 BPL boarding aircraft at the Séno base.

Paratroopers of 1 BPL boarding aircraft at the Séno base.

On 6 August 1954, following the implementation of the ceasefire in Indochina, 1BPL returned to Seno where it was integrated into the Laotian National Army (ANL). In October, following the departure of its French cadre it was redesignated the 1st Parachute Battalion  (1er Bataillon Parachutiste – 1BP). 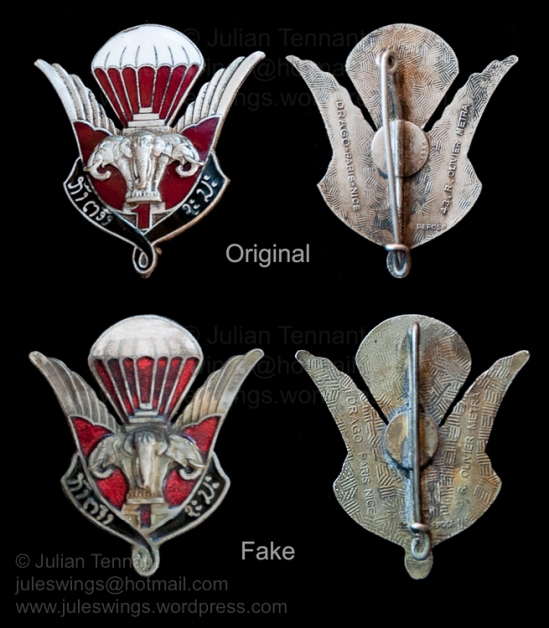 Comparison of my original 1952 French DRAGO OM hallmarked 1st Laotian Parachute Battalion badge (top) and a well made fake (bottom) that I first encountered during a trip to Vietnam in mid to late 2000. The fakes tend to feel slightly heavier than what you would expect for these badges and I suspect that is because of the alloys used. A very noticeable and critical point of difference is that the irregular hatching on the back does not match that of the originals. Nor does the text detail, which is a bit larger and less well defined as it is on the original. The detail and finish of the front of the badge is also lacking the fine precision of the original and this is particularly obvious on the elephants, text and parachute lines. Experience counts when looking at these badges. During that first encounter with the fakes in Vietnam it was only because several dealers at the notorious Dan Sinh market had examples of this and other rare French period badges that the red flags went up. At first glance the badges could be mistaken for original, but when compared to an original the differences are obvious. Caveat Emptor!