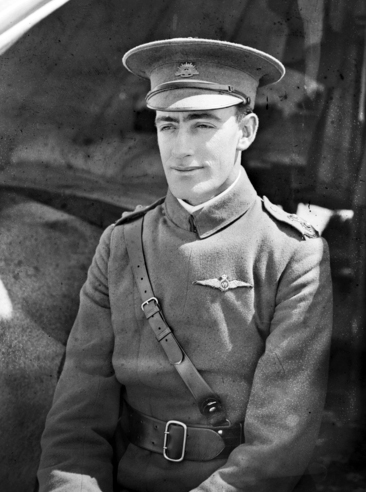 On the 20th of March 1917, Lt. Frank H McNamara became the first Australian aviator to be awarded the Victoria Cross after landing his aircraft behind enemy lines to rescue a downed comrade, whilst serving with No. 1 Squadron Australian Flying Corps in Palestine. The citation for the Victoria Cross reads,

“most conspicuous bravery and devotion to duty during an aerial bomb attack upon a hostile construction train, when one of our pilots was forced to land behind the enemy’s lines. Lieutenant McNamara, observing the pilots predicament and the fact that hostile cavalry were approaching, descended to his rescue. He did this under heavy rifle fire and in spite of the fact that he himself had been severely wounded in the thigh. He landed about 200 yards from the damaged machine, the pilot of which climbed on to Lieutenant McNamara’s machine, and an attempt was made to rise. Owing, however, to his disabled leg, Lieutenant McNamara was unable to keep his machine straight, and it turned over. The two officers, having extricated themselves, immediately set fire to the machine and made their way across to the damaged machine, which they succeeded in starting. Finally, Lieutenant McNamara, although weak from loss of blood. flew this machine back to the aerodrome, a distance of seventy miles, and thus completed his comrade’s rescue.”

Frank Hubert McNamara was born at Rushworth, Victoria, on 4 April 1894. After completing secondary schooling in Shepparton, he studied teaching at the Teachers Training College and the University of Melbourne and went on to teach at a number of Victorian Schools where he joined the senior cadet units. In 1912 he transferred to the Brighton Rifles and was commissioned as a second lieutenant in July 1913. After the outbreak of the First World War he served at Queenscliff and then Point Nepean before attending the Officers Training School at Broadmeadows, then between February and May 1915, instructed at the AIF Training Depot at Broadmeadows.

In August 1915 McNamara was selected to attend the Point Cook Flying School, graduating as a pilot in October that year. In January 1916 he was posted as an adjutant to No. 1 Squadron, Australian Flying Corps and sailed for Egypt. In May 1916 he was seconded to No. 42 Squadron, Royal Flying Corps to attend the Central Flying School at Upavon, England. Following this he was attached as an instructor to No. 22 Squadron of the Royal Flying Corps in Egypt before returning to duty with No. 1 Squadron.

On 20 March 1917 McNamara, flying on a bombing mission in Gaza, saw a fellow squadron member, Captain D. W. Rutherford, shot down. Although having just suffered a serious leg wound, McNamara landed near the stricken Rutherford who climbed aboard, but his wound prevented McNamara from taking off and the aircraft crashed. The two men returned to Rutherford’s plane, which they succeeded in starting and, with McNamara at the controls, they took off just as enemy cavalry arrived. For this action McNamara was awarded the Victoria Cross. 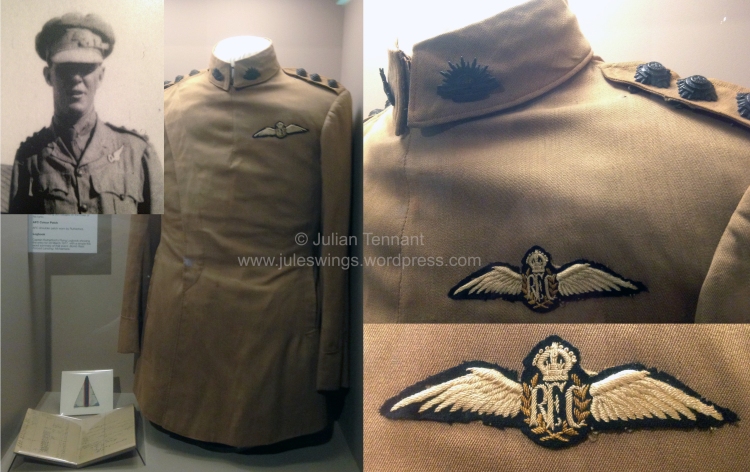 Portrait, maternity jacket and items belonging to Douglas Wallace Rutherford, No. 1 Sqn AFC, who was rescued by Frank McNamara in the action for which he was awarded the VC. These items all comprise part of the collection held at the RAAF Museum at Point Cook in Victoria. Note that despite being an AFC pilot, Wallace’s jacket features the pilot wings of the Royal Flying Corps (RFC), whilst the portrait shows him with the Observers brevet for which he originally qualified. Douglas Wallace Rutherford was born in Rockhampton, Queensland on 29 September 1890. He joined 5 Light Horse Regiment on 7 December 1914 and departed Australia later that month with the second contingent destined for Gallipoli. He went into action in May 1915 and was wounded on 28 June. After receiving medical attention in Alexandria, Egypt and London, UK, he returned to the 5th Light Horse in April 1916 and soon transferred to the Australian Flying Corps, qualifying as an Observer in August 1916. After promotion to Captain in November 1916, Rutherford commenced pilot training with the 5th School of Military Aeronautics at Aboukir, Egypt and by 1917 had returned to No. 1 Squadron AFC as a qualified pilot. Rutherford undertook operations against Turkish forces with No. 1 Squadron until being forced down in the Amman area and was captured by the Turks. He was imprisoned in Constantinople for six months before being returned to Australia in December 1918.

In April 1917McNamara was promoted to captain and appointed Flight Commander, but his wound prevented further flying and he was invalided to Australia in August. His appointment with the AFC ended in January 1918 but he was reappointed in September and became an aviation instructor. In 1921 he transferred to the newly established Royal Australian Air Force as a flight lieutenant and held a number of senior RAAF appointments between the wars, including two years on exchange to the RAF in the mid-1920s.

At the outbreak of the World War Two, McNamara was promoted to air commodore and then an air vice marshal in 1942. From 1942 until 1945 he served as Air Officer Commanding British Forces in Aden before returning to London as the RAAF’s representative at Britain’s Ministry of Defence. In July 1946 he became Director of Education at the headquarters of the British Occupation Administration in Germany. He remained in the UK after retiring and died in London on 2nd November 1961.