I went down a bit of a rabbit-hole for this week’s post which features my small collection of U.S. Department of State Air Wing patches that a mate brought back for me from one of his tours in Afghanistan. I thought that it would be a quick write-up until I started gathering some contextual information and before I knew it, I was downloading all sorts of declassified audits and other reports regarding their activities in Afghanistan. The reason I wanted to keep it short was to allow time to restructure my site to include additional pages featuring parts of my collection and also my TRADE insignia. Unfortunately that did not happen and I accidentally changed the overall site theme to this one (which I am not sure I like) and cannot revert to the previous layout.  So, I may delay the next post whilst I figure things out and try to make sense of it all. If you want to be kept up to date for the new content, please bookmark or FOLLOW the page. 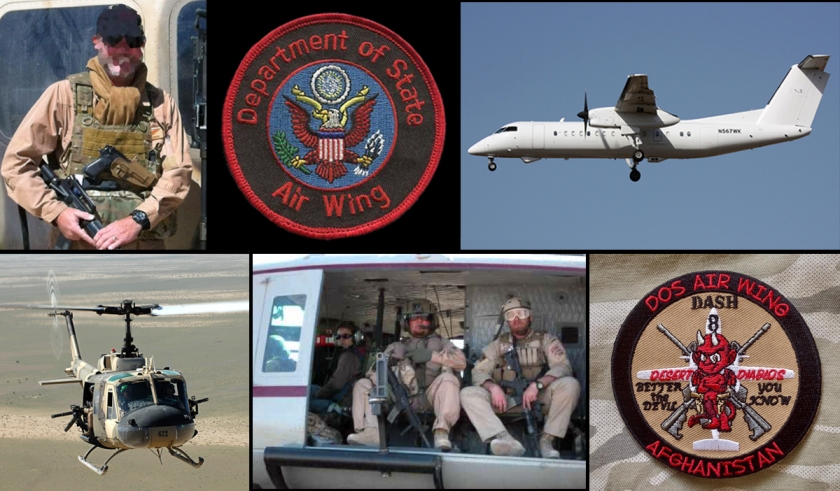 The United States Department of State (DOS), also referred to as the State Department, was established in 1789 as the first administrative arm of the executive branch of the U.S. federal government and is the American equivalent of the ministry of foreign affairs in other nations. Its primary duties are advising the U.S. president, administering diplomatic missions, negotiating international treaties and agreements, and representing the U.S. at the United Nations.

In 1978, the US Congress created the Bureau of International Narcotics Matters (INM) as an agency reporting to the Under Secretary for Civilian Security, Democracy, and Human Rights, with a general mission of developing policies and programs to combat international narcotics and crime. With the growing influx of cocaine into the US in the 1980’s the South and Central American regions were its initial focus. This included using a crop duster aircraft to eradicate illicit crops in Mexico. A separate Air Wing (DoS Air Wing) was established in 1986 as use of aviation assets grew in the war on drugs. END_OF_DOCUMENT_TOKEN_TO_BE_REPLACED

Australia. One of the Royal Australian Air Force pilot’s wings in my collection. This is the 1994 sealed sample for the individually named pattern authorised for pilots to wear on their flying suits. Collection: Julian Tennant
A quick look at some of the vehicles and equipment on display at the National Vietnam Veterans Museum in Victoria. I'll be doing a detailed review with plenty of photographs on www.juleswings.wordpress.com soon.
The Vietnam Veterans Museum @nationalvietnamveteransmuseum has several interesting lighters on display. This Zippo styled lighter, which is possibly the "Penguin" brand as was common for lighters with this type of USSF insignia, belonged to Captain Ian “Trader” Teague during his service with the Australian Army Training Team Vietnam.
Another pic from the National Vietnam Veterans Museum @nationalvietnamveteransmuseum in Victoria, Australia. This diorama is entitled 'The Loss of Two Zero Alpha, 1970' and depicts a scene in the aftermath of a mine explosion which destroyed carrier 20A of 3 Cavalry Regiment in February 1970. The diorama was created and donated by John Loughman in 2012.
Another pic from the Vietnam Veterans Museum @nationalvietnamveteransmuseum. These are locally made Royal Australian Armoured Corps and US Army 11th Armoured Cavalry patches attached to a flying suit belonging to 2nd Lieutenant Graeme Smith, troop commander of 2 Troop, 3 Cavalry Squadron. His troop operated with the US Army's 11th Armoured Cavalry from Bin Hoa Province to the North at 'Bear Cat'. Photo: Julian Tennant
I finally had the opportunity to visit the Australian National Vietnam Veterans Museum @nationalvietnamveteransmuseum on Phillip Island today. I spent about four hours examining and photographing the exhibits, which was a great way to spend the day. I’ll be post some teaser pictures on instagram and do a full review to my www.juleswings.wordpress.com site as soon as I can sort and caption them all.
Operation MARKET GARDEN. 17 - 25 September 1944. Here are some old images of the Airborne Museum 'Hartenstein' in Oosterbeek as the displays looked during my first visit in 1992. Some of these displays, such as that of the 1st (Polish) Independent Parachute Brigade are long gone. Others have been incorporated into the new displays, some of which are shown in my review at https://juleswings.wordpress.com/2019/09/15/operation-market-garden-the-airborne-museum-hartenstein/ or follow the link on my page.
Mozambique RENAMO guerrilla group parachutist wing and a photo showing the wing being worn by RENAMO troops after completing training provided by Reconnaissance Commandos (recces) of the South African Defence Force (SADF) at Phalaborwa.
Zimbabwe. Shown are some of the Air Force of Zimbabwe (AFZ) pilot wings and helicopter crewman’s brevets for dress and mess dress uniforms that I have in my collection. The photograph shows one of the 13 Alouette III helicopters still in service with the AFZ. Collection: Julian Tennant
Zimbabwe Army Service Corps Air Dispatcher wings and Zimbabwe National Army shoulder patch. Collection: Julian Tennant
A couple of the Afrikaner Weerstandsbeweging (meaning Afrikaaner Resistance Movement) and commonly known as AWB patches in my collection along with an old Republic of South Africa flag patch. AWB insignia are not something that I generally collect and these turned up with other pieces that I acquired, but they’re an interesting legacy of South Africa’s history. Collection: Julian Tennant
Something a bit different. This is a postcard given out in the Northern Territory by the Australian Defence Force in 1992 during the triennial ADF exercise K-92. The Kamarian forces represented the enemy/OPFOR troops who had landed in northern Australia and were battling Australian troops. These postcards were given away to help the civilian population identify the ‘bad guys’ if they spotted troops in the bush. Collection: Julian Tennant