The Caterpillar Club, started in 1922 by Leslie Irvin’s Irving Air Chute Company, as a way of recording the names of individuals whose lives had been saved by using a parachute to make an emergency descent. Stanley Switlik, owner of the Switlik Parachute Co. saw the potential of the Caterpillar Club as a means to promote its parachutes and soon instituted their own, Switlik Caterpillar Club.

Other companies also adopted the idea, awarding their own ‘Caterpillar Club’ awards to people who had saved their lives using the manufacturer’s parachutes. This included the Pioneer Parachute Co., Inc. which was established in 1938 in Manchester, Connecticut as a subsidiary of the Cheney Brothers Mills, the world’s largest silk factory complex. Pioneer Parachute Co. was the result of a partnership with DuPont and the Army Air Force to develop a new parachutes and on June 6, 1942, parachute packer, Adeline Gray made the first jump by a human with a nylon parachute at Brainard Field in Hartford. Like the other manufacturers of the time, Pioneer had its own Caterpillar Club pin for emergency descents, which featured a gold caterpillar on a rectangle box filled with red, white and blue enamel.

The Pioneer Parachute Co. Inc. which has evolved into the Pioneer Aerospace Corporation and is now a subsidiary of Safran Electronics and Defense no longer issues it’s own Caterpillar Awards and membership is now administered by the Switlik Caterpillar Club. However, for several years there has been a badge made for Pioneer and bearing its name on the reverse which is often described as being a Pioneer Caterpillar Club award with collectors sometimes paying sizeable sums of money in order to add it to their collection.

The pin, which is made from nickel plated brass, shows a parachutist with a deployed parachute. It measures approximately 25mm (1”) in height and 18mm (11/16”) in width. The reverse features the words PIONEER PARACHUTE CO. and a single clutch pin grip attachment mechanism.

The Pioneer Parachute Co. Promotional pin for their revolutionary Para-Commander and Para-Sail canopy design. This was a promotional piece and should not be confused with the Caterpillar award badges. Collection: Julian Tennant

This Pioneer pin is not a Caterpillar Club award but is actually just a promotional pin made for another of Pioneer’s innovations developed in collaboration Parachutes Incorporated (PI), namely the Para-Commander (PC) and Para-Sail parachute. The design of the pin’s parachute reflected this new PC canopy, which was a modification to an ascending, 24-gore (segment) parachute designed by the Frenchman Pierre M. Lemoigne and sold to Pioneer in 1962. These pins were given to buyers of this new parachute rig.

The multiple segments used to construct the canopy was revolutionary for parachutes of the time. Increased manoeuvrability and glide were provided by a vented rear and turn slots supported by stabilising segments on the sides. The skirt of the leading edge of the canopy was also positioned slightly higher thereby decreasing the drag and allowing air to be directed rearward towards the slots.  The rate of descent was slowed further because a lower porosity nylon taffeta used which added to the lifting characteristics of the canopy design.

Diagram plan views of the Pioneer Para-Commander rig showing feature details. Several of these, then, revolutionary design features can be seen in the PIONEER PARACHUTE CO. pin.

The PC was first demonstrated at the Orange Sport Parachute Centre in Massachusetts on the 4th of December 1962 and a patent (SN 159,606) filed on the 21st of December 1962. This new ‘high performance’ parachute quickly became popular and by 1966 they were being used by all the competitors in the US National Parachuting championships, with trials also underway for its adoption by the US military. 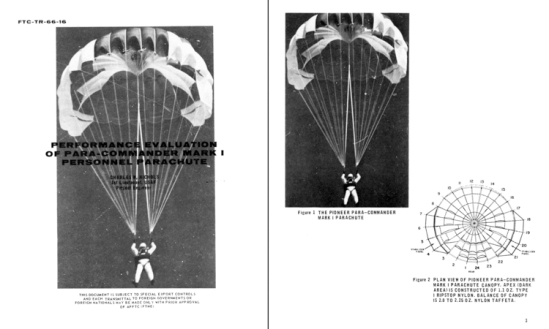 By the 1970’s rectangular canopied Ram-air parachutes, such as the Paraflite Para-Plane were starting to take over the sport parachuting market, although PC rigs were still used for trainee and military parachuting applications into the 1980’s.

The Pioneer PC pin was given to new buyers of the Para-Commander rig and whilst it is a memento reflecting an important development in the history of parachuting, collectors should not confuse the badge with the pins associated with membership of the Caterpillar Club.

American skydivers at a DZ in the 1960’s. Note the Pioneer PC pin being worn on the hat of the parachute rigger on the right. Photo: Jerry Irwin

Back in the 1920’s, along with Irvin, another manufacturer of parachutes, the Switlik Parachute Co of Trenton, New Jersey also thought that the caterpillar was a good idea to promote sales of its parachutes. Members of the Switlik Caterpillar Club, mostly Americans, receive a large certificate and a metal badge bearing the word ‘CATERPILLAR’ along the length of the badge. Like Irvin, Switlik continues to issue Caterpillar Club membership today and has also taken on the role for issuing membership to individuals whose lives had been saved using a Pioneer parachute for their emergency descent.

Switlik Caterpillar Club pin awarded in 1992 to a Soviet bomber pilot named AЕВИНСОН who was shot down by the Germans in June 1941. Collection: Julian Tennant

The Switlik Caterpillar Club badge that I feature here is one that was issued in 1992 to an old Russian airman who made an emergency descent in June 1943. I bought this pin back in 2005 from well-known para insignia collector, Don Strobaugh. He provided the following background to this particular pin.

“For more than 50 years, I used to do a lot traveling throughout the world. Several times during those years, I visited an older Soviet friend of mine in Leningrad. I spoke no Russian and he didn’t speak English, so we had a mutual friend who translated for us. I knew that he had been a Soviet paratrooper in 1936, because I had done some wonderful trading with him for 1930’s era Soviet parachutist badges that he had. Kept. During one of my visits in 1990, I also learned that he had become a Soviet Naval Air Force bomber pilot prior to WWII and had made an emergency parachute jump after having been shot down by the Germans on 23 June 1941. I mentioned that there was an organization that recognized emergency parachute jumps and asked if he would like to be a member of the Caterpillar Club. He said yes, so when I returned to the States, I submitted al of the information that he had given me that the Switlik Parachute Company needed to confirm his eligibility for the award. In 1992, when my wife and I went to visit him again, I hand carried the Caterpillar Club certificate and pin with me and presented it to him 51 years after his emergency jump. Last year the pin was returned to me by an anonymous sender from St. Petersburg (formerly Leningrad). He had no living relatives that I knew of, so this was probably telling me that he had passed away and someone had found my name associated with this pin. I received only the pin, not the certificate.”

When Don sent me the pin he also included a note which was returned with the pin which had the Pilot’s name, AЕВИНСОН, typed on a small piece of paper, which I think translates to Aevinson, but I have been unable to find out any more about this individual.

As can be seen from the picture, my 1992 period pin, does differ from the type made by the Metal Arts Co. of Rochester, New York (below) which Switlik issued during WW2 and are more often associated with the Switlik Caterpillar Club. I am not sure when Switlik changed the design and manufacture of their pin to the style that I have.

Caterpillar Club pin issued by Switlik during WW2. This pin was made by the Metal Arts Co. of Rochester New York. The pin was made in two sizes with a smaller version using a single screw post for attaching the badge to the shirt.

The two different sized Switlik Caterpillar Club badges made by the Metal Arts Co. during WW2.

Cindy Farrar Bryan shows some good pictures of the Caterpillar Club pins, membership cards and documentation in this post which recounts the story behind how her father, S/Sgt. George Farrar, a waist gunner on a B-17 in the 384th Bomb Group, earned his membership after an emergency jump in September 1944. The US Militaria Forum also has a great thread about the Caterpillar, Goldfish and Sea Squatters Club badges which includes lots of detailed pictures featuring both the front and backs of the various pin types and is an invaluable resource for collectors. And finally, the Smithsonian National Air and Space Museum recently published a great article on the ‘first’ members of the Caterpillar Club and also holds the Lt. Col. Falk Harmel Caterpillar Club Collection (1922-1940) which includes photographs and detailed reports of each of the first 700 documented emergency parachute jumps.

Flatbed scan of my two Caterpillar Club pins. The top example is Soviet bomber pilot, AЕВИНСОН’s Switlik badge awarded in 1992 in recognition of a jump made in 1941 and the lower pin is the Irvin Caterpillar Club badge awarded to RAAF pilot, Patrick Heffernan after bailing out from his Wellington bomber in November 1943. Collection: Julian Tennant