In 1941, fearing that the Japanese may launch an invasion of southern Africa from Vichy French controlled Madagascar, the OC of B Coy Rhodesian African Rifles, Captain Alan Gardiner Redfern was tasked with training a commando force of Rhodesians that could undertake guerrilla operations should an invasion occur.

Redfern was a good choice, a competent bushman who as a young school-boy had spent his weekends and school holidays camping out in the veldt with a native companion and carrying very little apart from a rifle, blanket some mealie meal (maize flour) and condensed milk. He was proficient in both the main African languages, Chishona and Sindebele and prior to the war worked in the Native Department (later renamed Internal Affairs) of the Southern Rhodesia Civil Service. 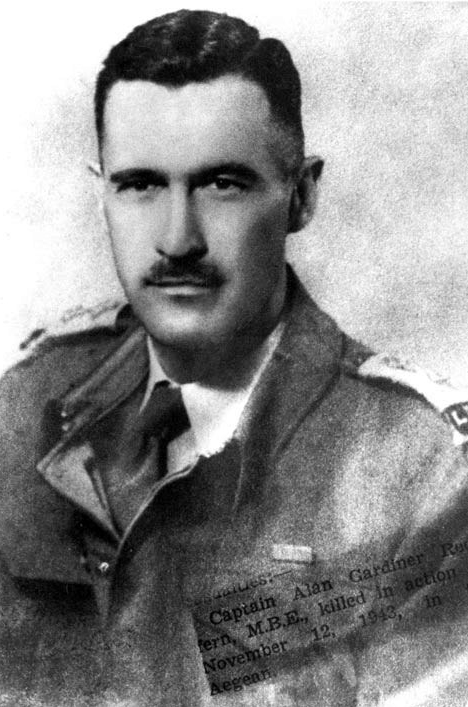 Captain (T/Maj) Alan Gardiner Redfern MBE, founder of the Southern Rhodesia Commando. Redfern was KIA in November 1943 whilst commanding B Squadron of the Long Range Desert Group on operations in the Aegean.

Recruits for the Southern Rhodesia Commando were a mix of volunteers and conscripts, many of whom were drawn from the farming community and as such already well versed with living in the bush. The unit was conceived as a part-time cadre, not as a regular unit, able to work behind enemy lines should the need arise. Training occurred over an initial period of six weeks with an emphasis on bushcraft, small unit guerrilla operations and a demolitions course which was conducted near Gwelo. After the initial training, the soldiers returned to their usual occupations although regular on-going training took place. 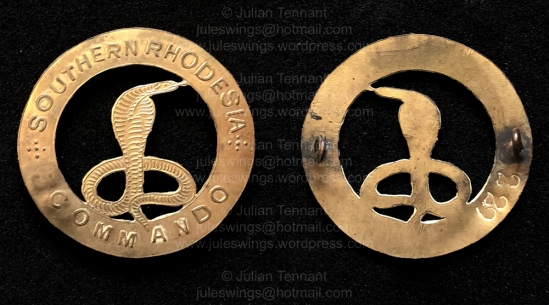 Sheet brass Southern Rhodesia Commando ‘Cobra’ badge awarded to successful participants of Redfern’s commando course. This badge was intended to be worn on the right shoulder sleeve, although photographs of Rhodesian LRDG members who completed the course show it being worn on the left shoulder sleeve. This badge is stamped with the serial number 229, but I do not know the identity of the original owner. Collection: Julian Tennant

The men who finally completed the course were awarded the ‘Cobra’ badge as recognition of their qualification. The badge depicts a cobra poised to strike within a circlet containing the words “Southern Rhodesia Commando”.  Each badge was individually numbered and were made from sheet brass by Keays Gold and Silversmiths in Salisbury.  The award was made in two sizes, the larger version, shown above, and worn on the uniform, plus a miniature silver lapel badge (also numbered) for wear on civilian attire. In an unpublished manuscript shown to me by fellow collector, Eric Crépin-Leblond, the uniform of the Southern Rhodesia Commando is described as follows,
“The No. 1 Dress uniform for part-timers who successfully completed the course was: Bush hat, turned up on the left side, pinned with the Lion and tusk badge. Khaki bush shirt, with curved brass ‘Rhodesia’ shoulder titles; ‘cobra’ badge in brass worn on the right sleeve below the shoulder. ’04 web belt. Trousers. Veldschoen.”

Miniature version of the Southern Rhodesia Commando qualification for wear on civilian shirt lapels. These badges were made from silver sheet and also individually numbered. This particular badge, number 120, was sold via auction in 2010 to an unidentified collector in Canada.

Little more is known about the Commando cadre and it is thought to have numbered less than 500 qualified members before it was disbanded in 1945. Many of the men from the Southern Rhodesia Commando subsequently volunteered to serve with the Long Range Desert Group (LRDG), forming S1 Patrol. On the nominal roll/database page of the the Long Range Desert Group Preservation Society  there is a small photo of Sergeant Hubert ‘Hughie’ Hein where he can be seen wearing the ‘Cobra’ badge on his left shoulder. I believe that this photo is also shown on page 110 in Craig Fourie and Jonathan Pittaway’s book LRDG Rhodesia but unfortunately I don’t have a copy to confirm if it is the same picture. Training with the Southern Rhodesia Commando is mentioned by some of the Rhodesian members of the LRDG in Pittaway’s subsequent book Long Range Desert Group Rhodesia: The Men Speak which also includes a picture of Signalman John “Fossie” Kevan who, once again is wearing his ‘Cobra’ on the left sleeve.  I can only surmise that the reason for the LRDG members wearing the badge on the left shoulder rather than the right as outlined in the original dress instruction, is because the same position on the right sleeve would have been reserved for their parachutist qualification wing. In both photographs it also appears that there was some kind of dark cloth used as a backing for badge but I have not yet identified the colour used.

For his role in forming the Southern Rhodesia Commando, Redfern was awarded the M.B.E., which he accepted with the understanding that he could join the men that he had trained who had subsequently joined the LRDG. On 22 April 1943, Captain Redfern transferred from the KRRC, reverting to the rank of 2nd Lieutenant before taking over command of S1 Patrol (LRDG) once again as a Captain in May 1943.  On October 15 he was made OC of B Squadron, but was killed in action on the 12th of November 1943 during LRDG operations in the Aegean.

Parachute Regiment beret on display at the Arnhem Oorlogsmuseum ( @arnhemsoorlogsmuseum ). The caption indicated that this beret belonged to a dead British para and was found in Hartenstein, site of the British HQ during Operation Market Garden. Note the unusual black rectangle behind the beret badge.
Officers beret of the Guards Independent Parachute Company on display at the Guards Museum @guardsmuseum
Early 1990’s era metal Cambodian Mine warning sign plus various civilian and military organisations involved in UXO operations in Cambodia.
One of my collecting interests. Australian Special Forces and Airborne related Zippo lighters. Here, a 3RAR Zippo made in 1999. Collection: Julian Tennant
A unique and personalised para patch named to a ‘McKenzie’ on the crutch flap of legendary 1950’s and 60’s Australian PJI Dutchy Holland’s Dennison smock. For more pictures and information about this uniform, visit my site.
Czech police special unit URNA (Útvar rychlého nasazení) beret