A couple of the earlier Congo Mercenary insignia in my collection. 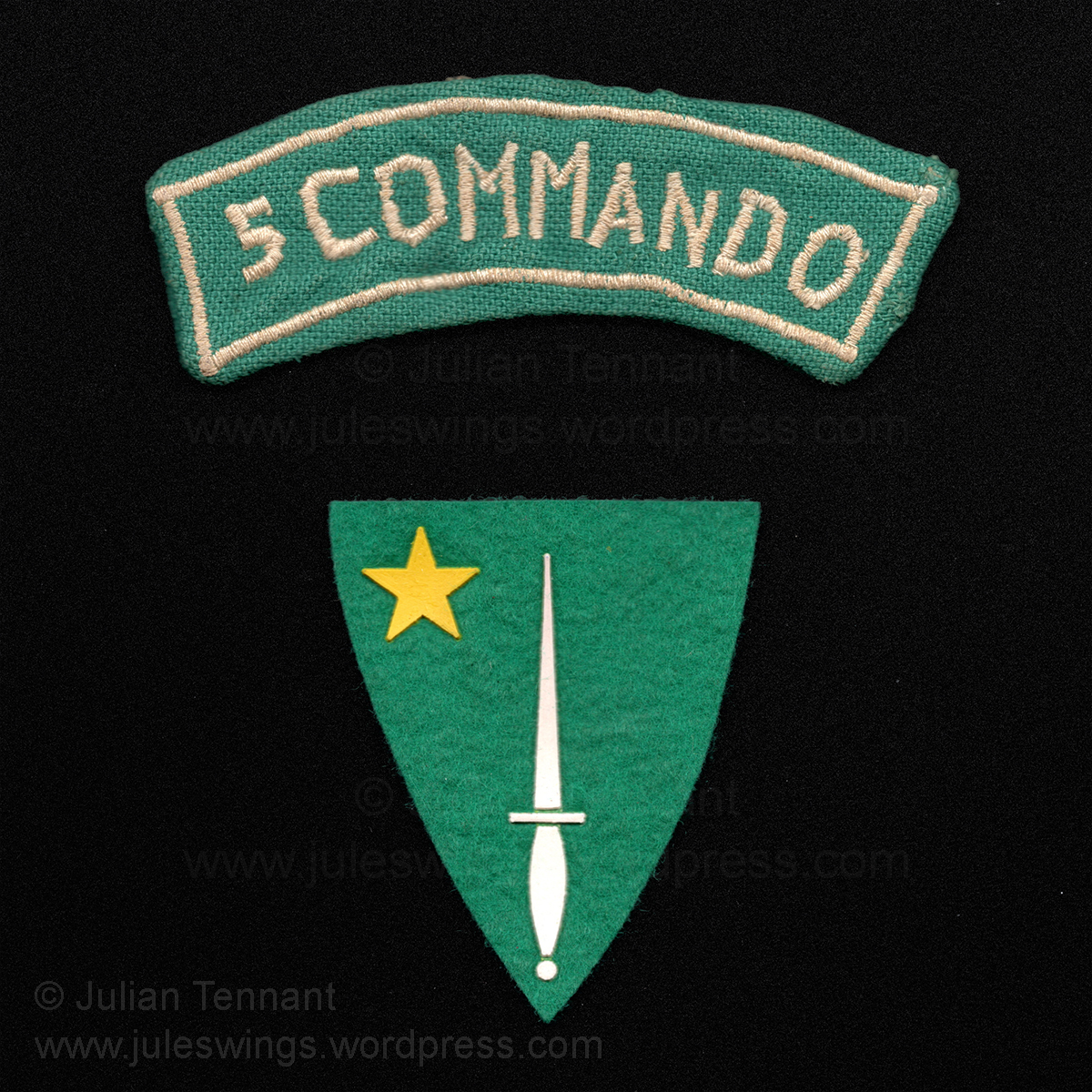 Here are a couple of relatively recent additions to my Congo mercenary collection, an early 5 Commando shoulder title and the shoulder patch of the Congo Commando Force Publique, both of which were worn on the right shoulder.

I am not sure when either of these two badges were introduced or superseded.  The aforementioned book suggests that the Congolese Commando Force Publique was created in the 1950’s and based at Sonankulu near Thysville, receiving their training from Belgian Commando instructors and that the patch dates from before 1960. Other information suggests that the Commando Force Publique patch was only worn between 1957 and 1960.

However whilst researching these badges I found this photograph of one of the original South African mercenaries in the Congo, Georg Schroeder wearing the insignia whilst a 1st Lieutenant in 5 Commando.

Georg Schroeder was a former South African Parachute Jump Instructor who arrived in the Congo in 1964 and was the last commanding officer of 5 Commando in Congo before they were disbanded and returned to South Africa in 1967.

This studio photograph shows him wearing an interesting assortment of insignia, including the aforementioned 5 Commando shoulder title and Congolese Commando shoulder patch. His rank is that of a 1st Lieutenant, which according to the information on Terry Aspinall’s Mercenary Wars site, indicates that this photograph was taken sometime between 17 September and 26 December 1964, when he was promoted to Captain and took over the command of 53 Commando.

Also visible are his South African PJI wings on his left breast above what appears to be the United Nations Medal with CONGO clasp that was awarded to denote service with the ONUC Mission (1960-64). I am not sure if he was entitled to the medal issue as he is also wearing a Belgian 1st Para Battalion beret despite not having served with that unit. The badge on his right breast remains unknown (to me) although I think it may be the same qualification that is shown as #911, but also unidentified in Andrew Ross Dinnes’ book, Border War Badges: A Guide to South African Military & Police Badges 1964-1994.

Congo mercenary insignia is one of my areas of collecting interest and whilst my collection remains quite small it does contain some nice pieces that I have previously featured on this page, most notably a patch worn by 10 Commando led by Jean ‘Black Jack’ Schramme and a nice group featuring insignia, medals, photographs and paperwork that belonged to another South African, Bill Jacobs, who served with the British Parachute Regiment in Cyprus, prior to enlisting in 5 Commando in 1966. If you are a collector of Mercenary insignia and have spares that you are interested in trading or selling, I will be very interested in hearing from you, so please contact me.

If you like what you see here, please FOLLOW this page via email or by using either the buttons below or in the column on the right.  I will try to post NEW content every second Sunday (at least) and knowing that somebody is looking at this gives me the encouragement I need to set aside time to go through my archives and collection in order to develop the content for the page. And of course, feel free to contact me here, via email or by visiting my Facebook or Instagram pages

This is a recent addition to my collection. It is an original shoulder patch used by the mercenaries of 10 Commando who were under the command of Colonel Jean Schramme in the 1960’s. This version is known as the 2nd pattern of the patch and is distinguished from the earlier type by only having the outline of Lake Tanganyika in blue, whilst the first version had the entire lake in blue silk. Both of the original patches were made using the precise, machine embroidered, silk-bevo style of construction as seen in this example.  Collectors should note that there are numerous fakes of this badge, many of which originate from the same fakers who make all the ARVN and US Vietnam war patches that can be found on ebay and at the War Surplus market at Dan Sinh. If you are interested in the mercenary insignia used in the Congo during the 1960’s, I would recommend that you try to find a copy of the late Gerard Lagaune’s excellent privately published reference, Histoire et insignes des parachutistes et des commandos de Pays des Grand Lacs.

10 Commando formed part of the 5th Mechanised Brigade, which was raised on the 1st of November 1964.  It was led by Belgian mercenary, Jean Schramme. “Black Jack” Schramme was a teenager when he went to the Congo to run the family plantation, located to the north-east of Stanleyville and it should be noted that despite often being seen wearing the beret of the 2nd Belgian Commando Battalion (and contrary to some of the information he presented in his biography), there is no evidence that he had ever qualified as a commando or served in the Belgian Commando Battalion prior to his mercenary activities.

In the troubles that followed independence in 1961, Schramme fled to Uganda and then moved to Katanga where he took part in the fighting, forming a group recruited from local tribes near the Kansimba region which he referred to as the “Leopard Group”.  After that period of fighting ended in 1963 he moved across the border into Angola before returning in 1964 with his now named 10 Commando which operated out of Fizi-Baraka to the East of the province of Maniema and not too far from a plantation that he had once controlled.

In 1967, 10 Commando was part of the revolt against the government of Colonel Mobuto Sese Seko who had become president two years previously. In early August, Schramme’s 10 Commando captured the border town of Bukavu, holding it for 7 weeks despite repeated attempts by the government ANC forces to recapture the town. On October 29, 1967 the ANC forces finally recaptured Bukavu and the soldiers of 10 Commando fled towards Rwanda crossing the border on the 13th of November 1967, where they were disarmed, ending the existence of this colourful mercenary unit.

French Parachutist brevet n ° 000001
Model of the First World War Submarine AE-2 on display in the RAN & HMAS Perth Interpretive Centre at the Princess Royal Fortress and National ANZAC Centre, Albany. Photo: Julian Tennant
South Vietnamese Navy SEAL / UDT pocket patch. Known as the Liên-Đoan Người Nhái (LDNN), or Frogman Group by 1971 the LDNN consisted of the South Vietnamese Navy's SEAL Team, Underwater Demolitions Team, Explosive Ordnance Disposal Team and Boat Support Team.
Another Afghan National Army commando patch brought back by a mate from one of his tours. This one worn by one of the interpreters working with the Australian Special Operations Task Group (SOTG). Collection: Julian Tennant
Various Afghan commando related patches picked up by an Australian Special Forces soldier during one of his deployments. Collection: Julian Tennant
Combined Joint Special Operations Task Force - Afghanistan or CJSOTF-A. This was a task force unit led by US Army Special Forces headquartered at Bagram Airfield and was part of the Special Operations Joint Task Force - Afghanistan / NATO Special Operations Component Command - Afghanistan.
Here is an original Congo Mercenary 10 Commando (Commando Kansimba) type 2 patch, from the unit led by Jean Schramme, an Armee Nationale Congolais identity document named to another mercenary and a Katanga pocket badge. Collection: Julian Tennant
Pre 1994 era Royal Australian Navy Clearance Dive Team 4 (CDT-4) Tactical Assault Group (TAG) insignia.
Some years ago I was fortunate enough to acquire this sand cast ‘Winged Boot’ award and South African Air Force cap badge which was brought back from the North African/ Western Desert campaign by an Australian digger who had served in the Middle East. The ‘Winged Boot’ was an official award, presented by the Late Arrivals Club which originated amongst the South African Air Force members of the RAF Western Desert Group in June 1941. The award was presented to servicemen whose aircraft had crashed or been shot down behind enemy lines and had to walk back to the Allied forces. The badge was sand cast and included varying amounts of silver content. This particular badge appears, to me, to be mainly brass, but it’s provenance makes it undoubtedly original. The two SAAF pilot wings are also both from the period but were a separate acquisition. Collection: Julian Tennant
A couple of older Australian Special Air Service Regiment sports uniform patches. Collection: Julian Tennant
Insignia worn by one of Australia’s less well known Special Forces units, the Combat Control Teams of B Flight 4 Squadron Royal Australian Air Force. For more info go to the link below in the comments. Beret badge and RAAF Commando qualification wings, Collection: Julian Tennant
UK Special Forces Communicators. Obsolete 264 (SAS) Signal Squadron stable belt and the replacement 18 (UKSF) Signal Regiment belt (also now obsolete) along with their beret badge and Special Forces Communicators (SFC) parachutist qualification wings. Collection: Julian Tennant