Last week, in Part 1 of my review of the Army Museum of Western Australia, I showed some of the exhibits from the Tradtions, Pre-1914, World War One, Prisoner of War and World War 2 Galleries. This second part focuses on the Post 1945 Galleries and the Guns & Vehicles section which includes the larger exhibits not displayed in the main exhibition building.

Entrance to the POST 1945 GALLERY at the Army Museum of Western Australia. Photo: Julian Tennant

The POST-1945 gallery examines the Army’s involvement from the Occupation of Japan, through the Korean, Malaya, Borneo and Vietnam conflicts up to contemporary operations in the Middle East. Also included are exhibits related to the various humanitarian and United Nations deployments as well as uniforms from the locally based Citizen Military Force (reservist) units. 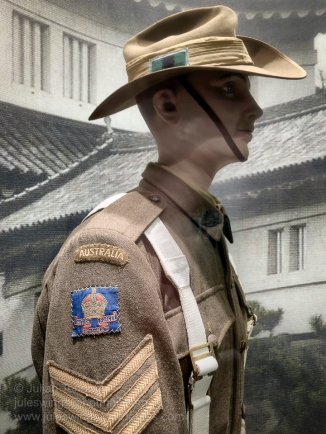 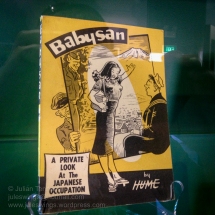 Babysan was a comic created by American artist Bill Hume while he was stationed in Japan in the 1950s. The comic depicts American sailors interacting with a pin-up style Japanese woman named Babysan. The title comes from the word “baby” an affectionate term Americans use and “san” which is an honorary term used by the Japanese. It translates literally to Miss Baby. The comic became incredibly popular with United States service members in Japan by mixing good humor with culture, language, and sex. Photo: Julian Tennant 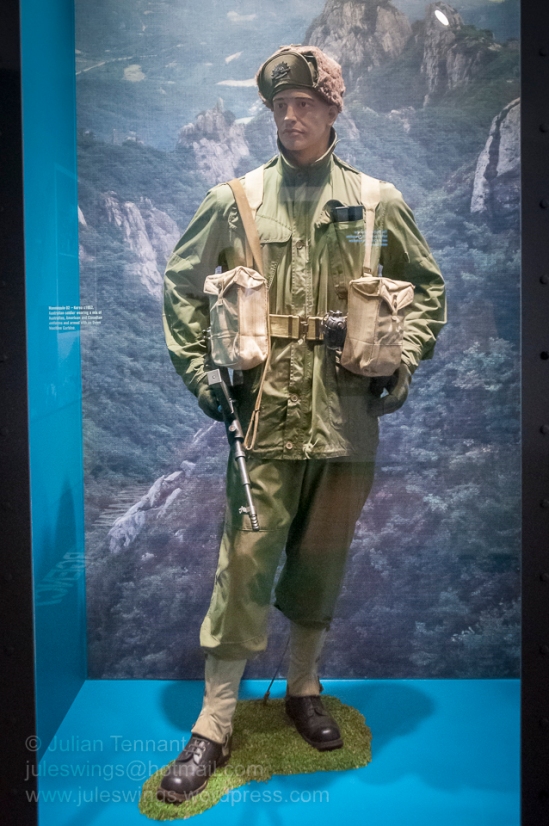 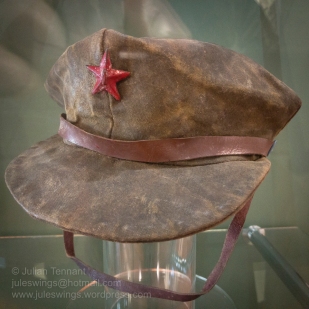 After covering the occupation of Japan, Korean War and Malayan emergency of the 1950’s the galleries then turn their attention to the army units based in Western Australia. 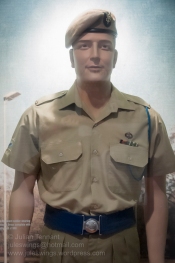 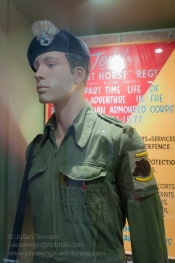 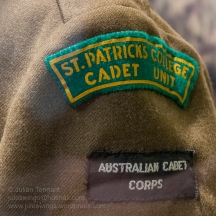 The galleries then turn their attention to the 1960’s with it’s Vietnam War displays which feature some interesting items related to members of the Perth based Special Air Service Regiment (SASR) in Vietnam. SASR, which was first raised as a Company based at the coastal suburb of Swanbourne. The unit first deployed on operations to Borneo prior to its service in Vietnam and this is the one gap that I noticed in the displays. However, I’m not sure if this is an omission on the part of the museum or just me missing something as I tried to take in everything on display. 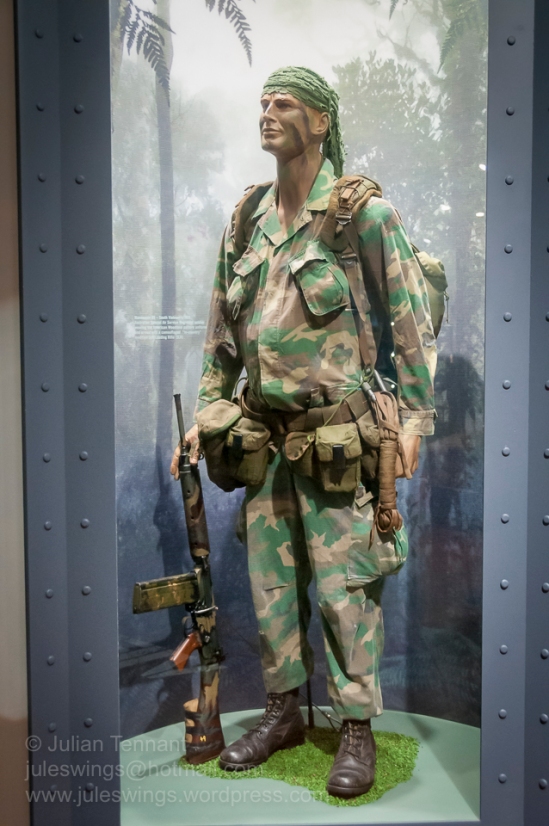 Delco AN/PRC-64 radio, which was used by the Australian Special Air Service Regiment (SASR) as their principle patrol radio for communications back to SHQ during their operations in Vietnam. Photo: Julian Tennant

Special Air Service Regiment beret belonging to Ian ‘Bagzar’ Stiles who served with 3 SAS Squadron (Australian Special Air Service Regiment) during both of their tours of Vietnam and then went on to serve with the Rhodesian SAS. Note the British made anodised beret badge and distinctive fawn coloured headband which was used on the SASR berets of the period. Photo: Julian Tennant 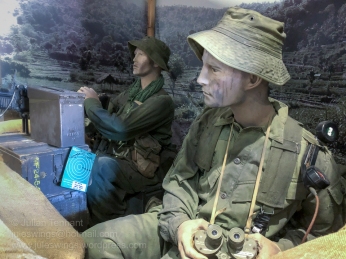 Japanese made Australian Training Team Vietnam (AATTV) patch. These patches were introduced in 1967 and the majority were made in Japan. Later, a small quantity were made locally in Vietnam, however the majority of AATTV members used this Japanese made patch. The locally made variation is extremely rare due to the small numbers manufactured and collectors should be cautious when acquiring these patches as they have been extensively copied and generally do not resemble the original ‘local-made’ patches. Photo: Julian Tennant

The POST 1945 Gallery then transitions to more recent operations including humanitarian support operations, United Nations deployments and Australia’s commitments to the conflicts in Afghanistan and Iraq.

Mine warning sign and shirt worn by Corporal Steve Danaher (RASIGS) whilst deployed to Cambodia as part of the UNTAC mission in 1993. Photo: Julian Tennant

Australian ‘digger’ wearing the uniform and equipment of the INTERFET deployment to East-Timor, 1999. Photo: Julian Tennant 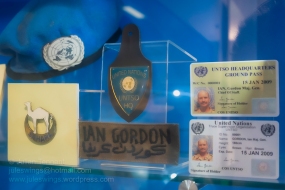 Items belonging to Major General Ian Gordon whilst commanding the United Nations Truce Supervision Organisation (UNSTO) in 2009. Also included is the beret and badge worn whilst he was a Lieutenant Colonel in Commando of UN Operation CEDILLA 1991 in the Western Sahara (MINURSO). Photo: Julian Tennant

The final section is referred to as GUNS AND VEHICLES and is spread around the main parade-ground plus the other covered locations external to the main building. The exhibits featured in this section range from heavy mortar’s and artillery pieces to armoured cars, tanks and other vehicles. Of particular interest in this section is the Australian Special Forces Amphibian Mk3 Commando Kayak which replaced the German made Klepper Aerius II in 1988. I was also surprised to see one of the Mercedes Unimogs that had been converted by SASR as a support vehicle for use in Afghanistan and I suspect that this may be the only one in a public collection in Australia.

Amphibian Mk3 Commando Kayak. Built in 1986 by PJP Marine of Kirrawee in NSW to replace the Klepper Aerius II then used by the Special Air Service Regiment, Australian Commandos and the RAN Special Ship Assault Navy Diving Teams. Designed to have no radar signature, quick to assemble and more stable under tow and during heavy sea operations than the German made Klepper, they were also air portable and capable of being launched from the Oberon and Collins class submarines. 120 were made and brought into service in 1988. Photo: Julian Tennant

Tanks and AFV’s at the front of the main building of the Army Museum of Western Australia. Photo: Julian Tennant

25 pounder gun and Centurion tank in the background at the Army Museum of Western Australia. Photo: Julian Tennant 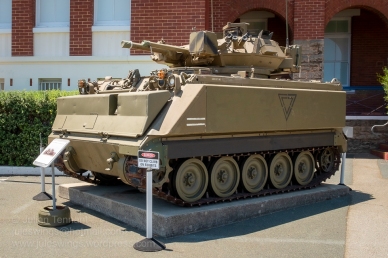 M113A1 MRV (Medium Reconnaissance Vehicle) which coupled the turret from the Scorpion FV101 light tank with the M113A1 Armoured Personnel Carrier for use as a fire support vehicle for Cavalry units. Between 1979 and 1996 a total of 45 M113A1 MRVs served in the Australian Army. Photo: Julian Tennant 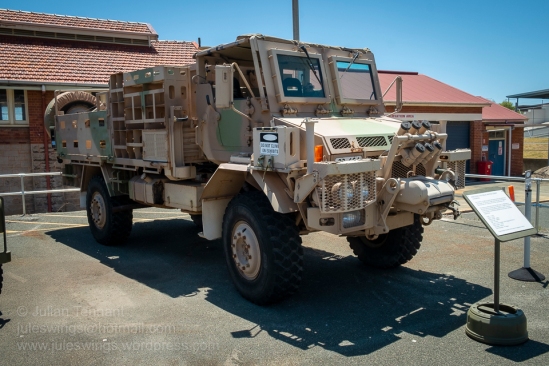 This is a well laid out and interesting museum, with clear descriptions of the exhibits, supported by a staff of volunteers including many ex-servicemen who are happy to chat to visitors. Being largely volunteer run, the opening hours are a little restricted, being from 10:30 until 15:00 (last entries 13:00) from Wednesday to Sunday. There is no on-site parking for visitors, but it is not too difficult to find parking in the surrounding streets. If you’re relying on public transport, several buses leaving from the Fremantle train station pass close by or it’s an easy 20-minute walk from the station. An important point for visitors to note is that all adult visitors must be able to show appropriate photo identification (passport, drivers’ licence etc) prior to entry.

A selection of Dies used to manufacture badges. These were in a section currently being prepared for display in one of the shed areas of the GUNS AND VEHICLES section, although I am not sure if this is where they will finally be placed on display. I suspect that the Dies are from the Sheridans company that is based in Perth and has made many military badges, particularly in the first half of the 20th century. Photo: Julian Tennant

Location map showing the relative distance of the Army Museum of Western Australia from Fremantle Train Station. It is quite an easy walk or there are regular bus services that stop nearby.

Open: Wednesday to Sunday inclusive from 10:30 am to 3:00 pm. Last entry at 1:00 pm.
Group bookings can be arranged for Wednesday, Thursday or Friday.