A little while back I was fortunate enough to get hold of a couple of badges that an Australian soldier brought back on a ‘badge belt’ which he had put together whilst serving in the Western Desert campaign during World War 2. The two badges are a South African Air Force cap badge and a rare sand-cast ‘Winged Boot’ badge, which I believe is  related to the SAAF badge.

The ‘Winged Boot’ award was an official award, presented by the Late Arrivals Club which originated amongst members of the South African Air Force members of the RAF Western Desert Group in June 1941. The award was presented to servicemen whose aircraft had crashed or been shot down behind enemy lines and had to walk back to the Allied forces. The badge was sand cast and included varying amounts of silver content. This particular badge appears to me, to be mainly brass, but it’s provenance makes it undoubtedly original.

RAF pilot from No. 38 Squadron wearing a “Winged Boot” award whilst stationed at Shallufa, Egypt, in early 1942.

The award badge was presented along with a certificate, which contained the motto, “It is never too late to come back” was to be worn on the pleat of the left pocket, just below the flap.   Whilst predominantly a commonwealth award, it was also adopted by some US servicemen (utilising a bullion variation of the design), primarily in the European and CBI theatres. 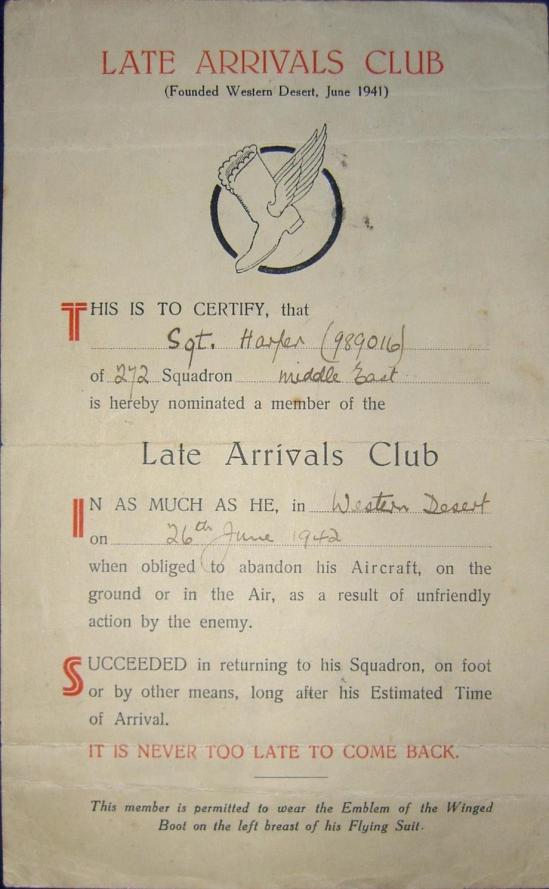 There is also a short news clip about the Late Arrivals Club showing both the badge and certificate which can also be seen on the Pathe News site.